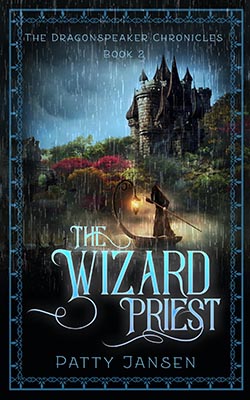 The Wizard Priest is book 2 in the Dragonspeaker Chronicles series

A young prince, an evil wizard, and a city that no longer seems to care.

Cast out from the palace, Nellie survives in the streets of Saardam with the poor and destitute and a dragon whose behaviour she can’t control, but is the key to finding the last member of the royal family.

The pompous Regent is hell-bent on finding the person who has killed his court advisor and he has decided the dragon is guilty. If he doesn’t find a culprit, his main source of money is at stake. The guards comb the city. It’s only a matter of time before they find Nellie.

A terrible mishap caused by the dragon puts Nellie’s friend and a number of other innocent people in prison. Nellie can no longer run and hide.

She concocts the most daring escape plan ever, but in gathering help to carry it out, she makes discoveries that may change the future of the city.

Praise for The Wizard Priest

“Again, a well written, pleasant surprise from Patty Jensen! Truly enjoy her lead character, Nellie is incredible. Driven, determined, having aged wisely, she is a tribute to sageness!–Amazon reviewer”

“This is a fantasy mystery with good character development and some interesting twists and turns. I look forward to the finale!–Amazon reviewer”

“There will be no ice left within a few days,” Mina said, her voice dark. “The Regent can hold the witch drownings by week’s end.”

“What are we going to tell the children?”

Mina shrugged and shook her head. Her eyes glittered before she wiped them with the back of her hand.

Nellie said, “We’ll tell them we will have a plan.”

She had no idea where that came from. She didn’t have a plan.

Mina turned to Nellie. “What sort of plan? What can we do? We’re just a bunch of poor women. No one will listen to us.” Her voice cracked.

“No idea yet, but we’ll make a plan. We’ll do something.” Mistress Johanna had always done something even if the situation seemed dire. Nellie wanted to believe they could do something. They had to try at the very least. “Do you believe it?”

“Coming here is part of the plan. We’re safe for now, we’re dry, we have food to eat. That was the first part of the plan.” Mina snorted. “I can’t see how we can do anything at all that will defeat a bevy of heavily armed guards.”

“We can’t defeat them. We need to surprise them with something smart.”

“I’m not smart. If I was, I’d have married a rich man and wouldn’t be in this position.”

“We have to think of something.”

Nellie tried to shut out Mina’s whining. Yes, things were bad, but that meant they had nothing left to lose. That meant they could do something utterly reckless. “We have a dragon.”

“We could use him to scare people.”

“In all the ways we don’t want it to. Look, I know that you can’t help it, but Agatha is right in saying that we never had any trouble before you came. You helped us and that was good, but I think it’s better if you went back to the palace.”

“Do you really think I could do that?”

Mina looked at her. “Do you think it’s that simple? Do you think anyone who watched me being dragged out the door by that dragon is just going to forget about it? There are whole armies looking for that dragon. Everyone in the palace is looking for him. Some people say he has killed a man, and they want either the dragon, or me, to be guilty. I can’t just pretend he wasn’t there.”