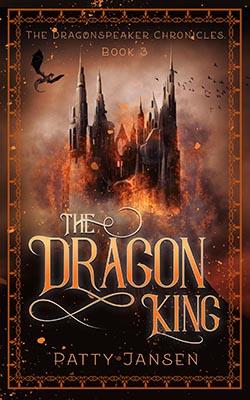 The Dragon King is book 3 in the Dragonspeaker Chronicles series

Saving Prince Bruno from the church crypts hasn’t turned out the way Nellie had planned. The boy is morose, angry, hellbent on revenge, and incapable of wielding the power he has been given. But the group of refugees who have fled from the city have bigger concerns. It’s winter, they need to survive, and find a safe place to recover and plan their next move.

But the boy does something stupid. Through the prince’s single impatient action, they don’t have the time to recover anymore. The wizard knows where he is, he has the whole city eating out of his hands, and Nellie has to come up with a plan to defeat him, because the only other option is death.

Praise for The Dragon King

“The Dragonspeaker books as a sequel to the Ghostspeaker books make for a complete and fabulous epic series that takes the reader to a faraway place, richly and lovingly detailed by the author. It’s whimsical, serious, dangerous and beautiful. I highly recommend it if you enjoy fantasy.–Amazon reviewer”

“Great series. I like that Nellie and Henrik are older. Nice to have heroine as older person. Great story. Good triumphs over evil.–Amazon reviewer”

Henrik came into the room, leaning against the doorpost. “Are you comfortable here?”

“It’s very kind of your daughter to put up with us,” Nellie said. “I hope this is isn’t going to be risky for them.”

“That is what you do for family. But we’re safe. If it were really as bad as Gus says, Master Thiele would have warned us.”

“He did say to be careful.”

Clara came back, and a moment later the bed was made. It was now starting to get warmer in the attic, and Nellie invited Henrik to sit by the fire in the attic room for a little while.

“Bring your blankets,” she said. “You can warm them by the fire and they will be nice and warm when you go to sleep.”

“I’m pretty tired,” Henrik said. “I’m not used to all this travelling anymore.” But he brought his blanket anyway, and he sat on the hard wooden chair with the cushions that stood next to the hearth.

“I’m sorry if I embarrass you,” Nellie said.

“But your family doesn’t know what to think about me.”

“That’s because I don’t know what to tell them. A friend doesn’t sound very satisfactory, does it?”

Nellie looked down. Blood rushed to her cheeks. “I don’t know that this is a good time to discuss . . .”

“Why not? We’re about to start something dangerous tomorrow. I don’t know that you understand how dangerous. It’s a mutiny. This whole town is eating out of the shepherd’s hand, and we’re wanted people. There are few people in town who will protect us, and we’ve spoken to those already. Everyone else in this town is hostile to us.”

“But then surely you understand not wanting to do this alone?”

Nellie wasn’t quite sure what he expected her to say. Martha had died a few years ago, and sometimes noblemen took a new wife very soon after their previous wife had died. But obviously Henrik and Martha had been very much in love, and she didn’t think that it would be appropriate to push Henrik on the matter.

She didn’t even dare hope that he was interested in her.

The attic was under the sloping roof of the house, and there was a small window in one of the sloping sides. From where she sat, Nellie could see the dark sky.

“You’re avoiding me,” he said.

“Why are you looking out the window, then?”

“Because I’ve just noticed there is a window.”

“I still think you’re avoiding me.”