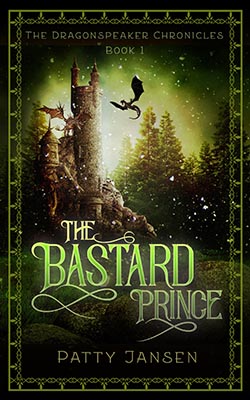 The Bastard Prince is book 1 in the Dragonspeaker Chronicles series

On her fiftieth birthday, she receives her late father’s diary, which describes a magical item that is so evil, it needs to be kept in the church crypt: a box that contains dragon.

Problem is, someone has stolen the box.

Praise for The Bastard Prince

“Action and intrigue, unexpected twists and turns and a character in Nellie Dreessen who has started out pretty darn wonderful and clearly is destined to be utterly superb. And don’t forget this series has dragons. I love dragons. Frankly this well written book deserves its five stars on its own – but it has me drooling for the books to come.–Amazon Top 1000 reviewer”

“This is so well done. I could really relate, because at one time I was meek but not truly dumb. So if you think, gah, this character isn’t strong enough for me….keep reading.–Amazon reviewer”

Nellie met Dora’s eyes. They were blue, and some said they were hard and cold, and that Dora was a careless woman. Nellie thought that was because Dora, as an older woman, had nothing to lose, so she said whatever she thought, and not everyone liked that.

“Well,” she said, and she blew the steam off her tea. No, she really didn’t like saying bad things about people in public, not even when those people were dead. “My father had strong ideas about what’s right and wrong.”

“Don’t they all, these church men? They think they know what’s best for everyone, but most of them do not understand our messy real lives. Sometimes the best thing to do, and the thing the church tells you to do, are not the same. I mean—these Church shepherds can’t marry, so what do they know about having families?”

And Dora’s family was a messy subject no one spoke much about. Not her abusive husband whom she had left, who might have been involved in a robbery where someone was killed, not her daughter who had also fled an abusive husband, and who lived with her, with a two-year-old child.

“This is not about that.”

“My father worked for the church and he saw a lot of things that the church spent money on. He didn’t agree with some of their . . . purchases.”

“Like what? Did they contribute to the Regent’s banquets and wine?”

“This is from before the Regent.”

“Oh, there would have been many things to disagree with when old King Nicholaos sat on the throne. Like how he hired necromancers.” “It is also not about those.” “What is is about, then?”

“Well, the enemy uses magic, why not inform yourself? Seems sensible.”

“While at the same time they were telling the citizens that magic is evil?”

Dora shrugged. “I never understood that part.” Her cheeks were red. “Magic is not evil. Not most at least. It’s how you use it.”

“Necromancy and ghost-whispering is evil. Fire demons are evil.”

Dora nodded, but gave no further comment. The subject of magic was never an easy one because you never knew who listened. So Nellie said, “He also said the church was hiding a dragon.”

Dora looked straight at her. “You’re kidding. A dragon? One of those huge ones that spits fire like ‘aaaggghhhhh’?” She made a hissing noise while holding her crumb-covered hands in front of her like claws.

“Did you mean one of these dragons that lives in a box and comes out to do the master’s bidding?”

“I don’t know any other dragon.”

“But those were only owned by the eastern traders.”

“I thought the eastern traders had all left the city.”

“Evidently, they did not to take their dragons with them.”

It felt like a flippant response. But Nellie felt very much out of her depth talking about the subject of dragons. In all the years the eastern traders had lived in Saardam, they had never displayed the dragons they had. The dragons were real, though, because Nellie had seen one once.