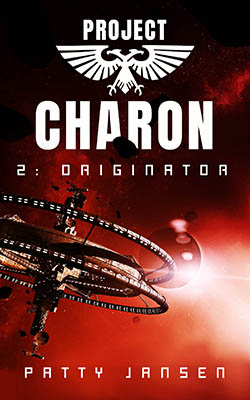 “And how much is that?” Deep dread settled in Tina’s stomach, because the subject of money was one they hadn’t covered up to now.

“You have got to be kidding.”

Eventually one of the men said, jerking his head at the crowded room on the other side of the glass wall, “That’s what they pay out there, too. It’s the going rate for this place.

Finn was going to have to pay if he wanted to get out of here. Which, clearly, he did.

She said to Rasa, “I’m going to talk to Finn. Stay here.”

“I’m not going anywhere.” Rasa put a biscuit in her mouth.

But Rex wasn’t listening at all. He stared at the wall screen. He said in low voice, “Mum.”

Tina turned to the wall screen and saw her own face from an ugly, poorly exposed photo taken many years ago when she still worked for Project Charon.

The announcer said, “The situation at Kelso Station has worsened, with the Federacy now taking control of the station again. They have captured our freedom fighters, and have executed a number of our brave soldiers. We are aware that the traitor we came to capture has escaped the station, unfortunately. If you have seen this woman, please do not talk to her or engage her, because she is considered dangerous. She is in possession of important information that may determine our survival. Contact the authorities straight away. If you are watching this, hand yourself over to authorities in orderly fashion. You will not be able to leave this station alive otherwise.”

Tina turned away from the screen. People were still watching the announcement, and she didn’t think any of them had recognised her. Yet.

“We’ve gotta get out of here,” she said to Rex.