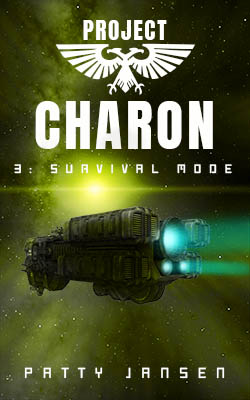 Tina had no choice but to escape Aurora Station on board the Starfighter Manila: the ship was about to blow up and would have killed the entire station.

But they’re in deep trouble. They have less than half the very minimum crew number necessary to fly the ship safely, the engines are damaged and Tina’s travel companions are on a different ship.

Aurora Station fell into pirate hands, so returning is not an option and the ship isn’t safe to fly long distances.

On top of that, several crew members may have been exposed to genetic treatment by the pirates and may be turning into violent monstrous creatures.

With no outside help forthcoming, survival becomes an intense battle.

Aliz touched something on the control panel, and several screens before her joined up into one large projection.

She moved her fingers around, making a point move across the image.

She described a small circle in the background. It enlarged.

“This is a feed I’m getting from our surveillance drone.”

The view showed a star field with a few larger specks. Tina recognised the shape of Aurora Space Station.

Several small specks were hanging around it. She also knew that in this type of projection, the Federacy ships would display the codes next to them.

“Are those all pirate ships?” she asked.

“They could be anything. This feed is not even sending me any probable suggestions. For all I know, they could be merchant ships waiting to be allowed to dock at the station, or they could be hostile and I don’t want to make any guesses what they are.”

She shifted the focus to another area, well outside the reach of the waiting fleet.

It showed an asteroid field.

“We know some ships of the pirate fleet are hiding in here,” she said. “This is where they came from when they attacked us. We can’t see how many of them are in here because many of the ships are small, and they may even have bases inside this field. Who knows?”

She shifted the focus of the projection again, showing one ship in an otherwise deserted field.

“I’m guessing that is us?” Tina asked.

“That’s correct. If you peer out the window, you might be able to see this large asteroid that’s quite light in colour.”

“Then where are the Federacy ships? I believe you were with the fleet when you were attacked.”

She pointed. “These are the closest ships. They’re part of what remains of our fleet, but they’re only a supply ship, a couple of crew ships, a surveillance ship and a fighter carrier ship. They’re at least three weeks away. We were captured and towed here.”

“But certainly the carrier would still have their fighters?”

“They do, but they’re on the way out, because they lost most of their crew in the attack where we were captured, and they’re afraid that if the pirates get hold of the ship, they will steal all the fighters that they don’t have the crew to defend. Then we’ll be in worse trouble than we are now.”

“So, essentially, there is no one who might be able to give us help?”

“Pretty much, at least for the time being.”

Evelle said, “We must save ourselves, whatever form that’s going to take. Because no one is going to do it for us.”