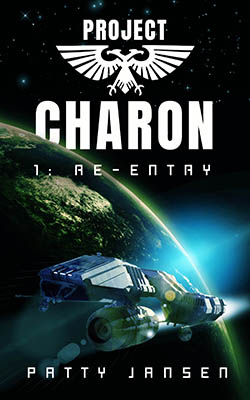 A group of people had arrived at the reception. They were all quite young, and spoke with a tone of bravado that made Tina sure that they were military personnel of some description, even if they did not wear uniforms.

She and Rex had to wait until they had all been allocated rooms. They stood in the corner of the tiny lobby area, trying to keep out of the way of people walking into and out of the place. Some of them knew the group that was checking in, and lots of noisy greeting ensued.

Two people walked past, one of them wearing an exoskeleton like Tina had never seen before. It allowed the wearer to walk normally. It was dark blue and gleaming. Little lights lit up along the legs and in the hips as the various parts engaged. Tina couldn’t even work out whether the person wearing it was disabled. It looked like an arrangement that people would wear just for fun. The man’s steps were bouncy, almost soundless, none of this clonking and creaking that Rex’s harness made.

Rex stared at the man until he disappeared inside the lift. Then he looked at Tina. It went without saying: that harness would be small enough to fit in between the wall and the bed. It might even be able to shuffle sideways.

He said nothing, but she could see the longing in his eyes.

He looked ancient and battered in his old-fashioned harness, and she finally realised that this was why people in the station had been staring at him. They’d been wondering why the piece wasn’t in a museum, considering him some sort of apparition from the past.

The group of military personnel had gone from the reception area, and it was Tina’s turn to go up to the counter.

“What can I do for you?” the woman behind the desk asked.

“Do you have a larger room?”

“That will be difficult. As you can see we are very busy.”

“But my son doesn’t fit in between the bed and the wall. I did tell you in my application that I needed extra room.”

For moment, the woman looked at the screen to find Tina’s details.

“That’s right, you did. I assumed that he was wearing a normal exoskeleton.”

And she looked at Rex as if he was something from another dimension. “Is that part of a costume or something? Or are you trying to sell it to collectors?”

Tina gave her the iciest stare she could manage. “The application didn’t have a box to enter dimensions for the space we needed. I assume that people wear different types of harnesses depending on their conditions.”

“Oh. No, I didn’t realise that. I suppose we should change that.”

Another curious look at Rex, because now, clearly, something was wrong with him much worse than what was wrong with all the other people who wore exoskeletons at Kelso Station.