The Dragon Prince is book 5 in the Ghostspeaker Chronicles series 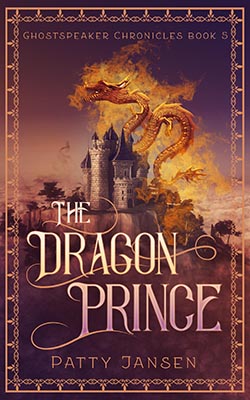 The people don’t want them in their town. The Church of the Triune, which forbids magic, has increased its hold on the population, despite the Red Baron’s efforts to stamp it out.

A snippet from the book:

The presence of the king was only indicated by the two palace guards who stood in front of the reed beds, while a group of courtiers hovered around a table that evidently contained Roald’s morning tea in which he took little interest, as usual. Johanna had told them repeatedly not to bother, but they insisted that the king “had to eat well” and was “much too thin”. Yes to both accounts, but trying to get Roald to do it was an effort that was best spent at the dinner table.

Johanna went to the table and took a cake from the plate held out to her by the courtier.

She was just about to join Father whom she spotted on another bench when there was a shout from the reeds, the tone of the voice distressed.

The guards looked at each other and frowned. Johanna looked at Father. The courtiers gasped.

“Was that His Majesty?”

The guards had already taken off into the reed bed.

He would not answer that of course. He never did.

Johanna ploughed into the reeds after the guards. There was a narrow path where Roald usually walked. The ground was pretty soggy here and she had to step carefully from one patch of flattened reeds to the next so her shoes didn’t sink into the mud. Her dress snagged on sticks that had washed up during the flood.

Something went, “Eeeeh! Eeeeeh!” in the reeds.

A courtier caught up with her. The man ran past her through the reed bed with a splosh-splosh-splosh and disappeared into the greenery in the direction of the river.
There was another shout, this time from one of the guards at the front.

She kicked off her shoes off and continued clumsily. The reeds were hard to walk on with her soft feet. The water was cold and the mud squished—eeew–between her toes.

The hem of her dress got wet. She could see glimpses of the courtier’s back between the reeds. He was heaving something heavy.

By the Triune, Roald was all right, was he?

But his voice was still going, “Eeeeh! Eeeeeh!”

He did that when he was distressed. He would be swaying, his eyes wide. She had to get to him quickly, to comfort him.

The courtier blocked her path. “No, Your Majesty. You shouldn’t see this in your condition.”