Shifting Infinity is book 2 in the ISF-Allion series 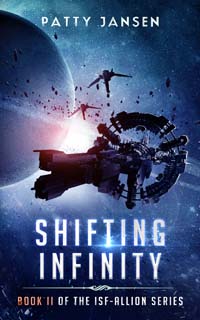 Buy Shifting Infinity direct from the author with delivery by Bookfunnel

The flight deck of the Starship Felicity operated in slumber mode. The main lights were switched off, rows of chairs that faced consoles were empty and screens idled in powersaver mode. Up at the front, near the central command module, a skeleton crew attended to the basic ship functions, but most of those were automated, so they had plenty of time to gawk at the newcomers on the deck.

Melati walked across the soft carpet between the rows of workstations, feeling very visible under their stares. She was following the broad back of the Private who had come to see her in the Lab & Research rec room with a message that contained words such as need to come immediately and Captain wants to see you.

The Private–Second Class–was Force and his presence this high up in the ship caused a few raised eyebrows. Force personnel needed a pass to come to the flight deck, and those passes weren’t given out lightly. Melati wore her new shiny Fleet badge but since she worked in Research three levels down, she never came here either. The Captain was very strict on that.

For that matter, the Captain wasn’t on the flight deck at the moment. The entire central command module was powered down. Screens were black and only a few lights that sent out the occasional blink proved that the ship wasn’t dead. Lazy text scrolled over a strip of screen near the ceiling, detailing in green letters which docking tube, which entry, which weapons access, which airlock and hatch were open or in use, but no one was there to see that information.

Everything said We’re a dangerous war ship, but right now we’re not doing anything.

The Felicity hadn’t done anything, in fact, for about ten months.

Parked in orbit was the term.

Servicing weapons. Taking them apart and putting them back together again. Checking the nuclear heads. Counting them. Putting them back. Servicing the engines. Checking the life rafts. Cleaning the ship. Mucking out the recycling plant. The list went on. Anything that wasn’t being involved in an active conflict.

Currently the ship drifted in the ink-black shade of the gas giant Sarasvati. The main projector screen at the very front of the room showed sharp-edged back-lit curves that were part of the planet’s ice rings. Out there in a wider orbit would be New Jakarta Station, which had been the subject of the Felicity‘s shadowing since the occupation of the station by Allion.

The flight deck of the Felicity followed the basic ISF ship layout: there were command meeting rooms at the flight deck’s back wall, and it was here that the Private led Melati.

He stopped at one such door, knocked and opened it.

Melati followed him inside.

The soft threatening silence and dimmed light of the flight deck were replaced by luxurious surroundings and a warm glow. And the ubiquitous smell of hot chocolate.

Seated around the oval table in the centre of the room were a good number of the ship’s resident top brass, both Fleet and Force. It looked like some had also just arrived, because they were finding seats and taking off jackets. A Fleet Private Second Class was distributing cups from a tray–the source of the smell.

The Felicity‘s Captain Polina Dolchova sat at the head of the table in her utilitarian everyday Fleet uniform. Next to her, Major Song Chevanchy of _Fleet_ Special & Tech Services sat ramrod straight, with a comm pad on the table in front of him, which he held, in perfectly symmetrical fashion, in both hands. Next to him sat Force Base Commander–now without a base–Sandy Cocaro, who greeted Melati with a nod. “Lieutenant Rudiyanto.”

That sounded new and strange and made her heart jump a little. Better than just Melati. She had acquired the rank two ship days ago when she completed her officer training and she was a Lieutenant Second Class in the Research Division. It came with a shiny white uniform and a badge that said SS Felicity. She had been assigned to Fleet, because she needed to be based somewhere and there was no more ISF base on New Jakarta Station, so they couldn’t station people there.

On the other side of the Captain sat Force Major Alan Dixon, former head of Communication and Information Technology at New Jakarta and speaking to him in a low voice was Fleet Major Pippa Fujimoto, of Artillery and Ordnance, SS Felicity.

Wow. The room was almost too bright for the stars.

Melati pulled back a chair while Commander Cocaro dismissed the Private. Right. So she had sent him.

“Chocolate?” the Fleet Private asked Melati, while holding a thermos jar in front of her.

He poured and passed her a cup of the frothing liquid. Melati clamped her hands around the cup. She was probably just nervous, but her hands were cold.

There was a techie in the room. His tool box, on the floor against the wall, said Flight Electronics Officer Second Class Parson, but the owner of the box was crawling under the table to–Melati thought–prod a misbehaving router into action. Dolchova had a comms pad in front of her and the nozzles of the holo-projector on the table glowed with light.

“Are we almost done, Parson?” The captain was not known for her patience.

“Almost, Ma’am.” His voice sounded muffled under the table.

Melati eyed the pad facing the captain, but there was nothing on the screen. What was this meeting about?