Ambassador 1A: The Sahara Conspiracy 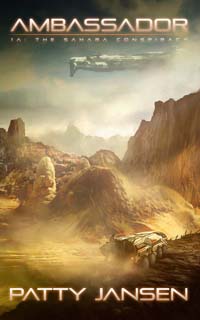 Ambassador 1A: The Sahara Conspiracy is book 1A in the Ambassador series

Cory Wilson is woken in the middle of the night with a summons to appear in the president of Nations of Earth’s office. An aid worker in Djibouti has discovered a shipment of alien guns.

As ambassador to gamra, the extraterrestrial organisation which controls the Exchange, the FTL wormhole network, Cory has often been critical of Earth’s handling of extraterrestrial problems. This is his moment to shine, to apply his knowledge about alien customs, to, in the words of the president, “get those idiots out of there”.

Except the usual suspects, the Zhori mafia who have caused trouble on Earth for a long time, are nowhere to be seen. This is something far more dangerous, something that involves all of northern Africa, something that provokes the anger of Asto, gamra’s largest world. Asto’s army is already prowling in orbit, ready to strike.

Praise for Ambassador 1A: The Sahara Conspiracy

“If you enjoyed the first book Seeing Red than you will love this one. It has the right amount of pace and action combined with plausible SciFi technology to keep you turning the pages. –Amazon Reviewer”

“Cory and his associates and bodyguards are on a new adventure, this time right here on planet earth. But other worlds and their very different races and beliefs were interwoven very well into a fascinating story. I loved it, and will read more of the Ambassador Series! –Amazon Reviewer”

ONE OF THE LESSONS of life: white material in a plastic bag spells trouble, especially when slapped onto the counter of a dark shop in the outskirts of Djibouti by a man missing his front teeth and with a look that said, “Here’s the stuff, now give me the money.”

Trouble was, I had no idea what was in that bag, and neither did I have any money of the type that he would accept.

I’d walked into his shop because Tamu at the hotel had told me this was where I could hire a pilot and I wasn’t going to become an accomplice in someone’s drug ring. With his teeth gone, the man could be a krayfish, the first we’d seen. Could be. Or he might just have bad teeth. I was starting to distrust everyone in this crowded, stinking town.

I eyed the white stuff, which looked like a bar of soap crushed under an elephant’s foot, and decided to ignore it.

“Actually, I’m looking to hire a reliable pilot. Can you help me?”

He squinted at me. Sounds of people talking drifted in from outside, as well as wafts of hot desert air. “I he lp people with eperything, mista. Where do you want to go?”

“I’ll tell the pilot that.”

“Oh, there are no secrets here, mista. You leave and ask permission and then eperyone will know where you go.”

“I hap the best pilots in the world.”  I had to admit that the lack of front teeth did interesting things to one’s ability to say the letter v.

“Then get me onto one those pilots.” I pushed the bag with the white stuff back to him.

“I think we’ll be fine.” I had my adaptation medicine. I’d take an extra dose. My body temperature would go up and I could stand the heat.

He put the bag back under the counter with a kind of suit yourself look on his face. No, I did not want his drugs. I really didn’t.

“A pilot,” I reminded him, hoping that my refusal to buy his drugs was not going to create ripples.

We could handle small-time crooks, but really wanted to stay out of the way of the big guys on top of everything else.

“Yes, yes.” He pulled an earpiece out of his pocket. Earth-made, so that was all above water. He didn’t seem to like how I watched, so he turned his back to the counter. He spoke to someone in local dialect, with a lot of hand gestures.