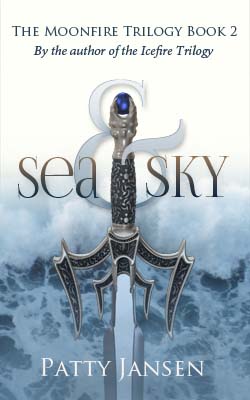 Sea & Sky is book 2 in the Moonfire Trilogy series

“I Really enjoyed this book. There is a definite twist in this storyline that I won’t share. I really like the writers style. She is one of the authors that paints pictures with words. I could actually feel the breeze and the words carried by magic through the willows. There were points where the suspense actually had me hurrying to know what was happening next and that is the sign of a good author when you can feel real emotions from the words. Can’t wait for the next!–Amazon reviewer”

“Love this fantasy story of magic and the supernatural. Well written and complex characters make it very intriguing and suspenseful.–Amazon reviewer”