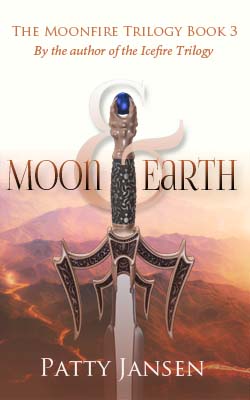 Moon & Earth is book 3 in the Moonfire Trilogy series

“This series are such an adventure! There is such interesting combination between technology and magic, knowledge and mystery! Loved the characters as they are vary realistic, they experience so many character building challenges and they developed a lot throughout the series. –Amazon Reviewer”

“What happens if a mother fails to become pregnant?”

“There have been a few. Usually, the king stops seeing them as frequently, and he passes the woman to the junior princes. If they fail, too, she gets to work in some place like the laundry. That’s not pleasant because the lower class men will know that they can jump on her without consequences and . . . those girls are usually found floating face down in the river within the year. I truly feel sorry for them. If you were ever thinking of taking something . . . to prevent pregnancy, I would strongly advise you to stop. He will find out. He will not take to it kindly. The discomfort and bother and pain of pushing out a child is nothing compared to incurring his wrath.”

Lana’s ears glowed. “I could be infertile because of my heritage. How many times does he try?”

Selwa grabbed her upper arm. “Look at me.”

“Whatever you’re taking, stop it. It’s not worth it.

“I didn’t ask to have Sferuk, or Nayek or any of the others. I definitely didn’t ask for this last cursed child that almost killed me. The king decides that you will have a child. You give him the child. Rest assured, he only asks when he needs it.”