Fire Wizard is book 4 in the Ghostspeaker Chronicles series 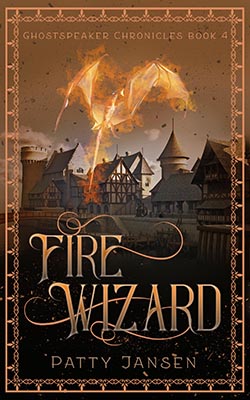 Buy Fire Wizard direct from the author with delivery by Bookfunnel

A snippet from the book:

A breeze wafted through the corridor, making the flame in the lamp flap. Johanna’s skin pricked.

She peered into the darkness at the far end of the corridor. “Why is it so windy?”

“There are probably some doors open,” one of the men said. He sounded as uneasy as Johanna felt.

The night had been cloudless and still, not the type of weather for a breeze.

Johanna had an awful feeling that she was about to find out why Alexandre had not done anything with the palace and why didn’t live here, why people had left a wheelbarrow and a broom and had gotten no further than a cursory tidy-up of the hall.

“Quick, let’s get out of here,” Master Willems said. He was looking over his shoulder, his eyes wide. What had he seen on that breeze?

One of the men took off his jacket and Johanna rolled the crown and staff inside. She pulled a folded cloth from the broom cupboard, which turned out to be an old sheet, tied it around the precious loot, and tied that around her waist.

They left quickly in the same way they had come. Through the corridor, the foyer, through the hall and into the ball room. Master Willems walked at the front, but the flapping flame from the storm lamp barely produced enough light for Johanna to see. It was as if a darkness had descended on the air that took away any light and a cold had crept into the building that settled in her bones.

Master Willems stopped abruptly at the door into the garden room.

“Someone out there,” he whispered.

Johanna peered into the room, but didn’t see anything.

Meanwhile, Master Willems slid the covers over the light’s windows, plunging the room into darkness.

Johanna stood still for a while, staring into the night, waiting for her eyes to see where a human couldn’t possibly see, listening, holding her breath and trying to hear over her thudding heart. Then a sound came from somewhere in the darkness: the growl of some sort of animal, like a dog, or a bear.

“What’s that?” someone whispered.

“It may be a good idea to split up,” Master Willems said, not answering the question.

“What did you see in the breeze?” Johanna asked him.

“I’m not sure.” He sounded evasive. Even the danger had changed nothing and he still denied the fact that he possessed some magic. “Look, why don’t you go straight for home with the young boys. They’ll help you over the wall and will take you to safety.”

“We’ll go… the other way and keep them busy. Whatever ‘they’ are.”