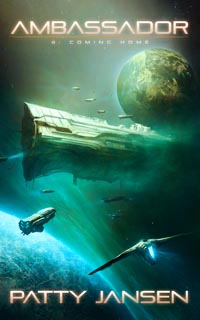 Ambassador 4: Coming Home is book 4 in the Ambassador series

“The series just keeps getting better and better. I don’t like to rehash the plot of the story as I think that detracts from the reader’s enjoyment of a book. Let me just say this: this series allows the reader to follow the political maturing of an honest diplomat that tries to deal with trying situations with integrity. I highly recommend this series.–Amazon reviewer”

The tram groaned to a halt. The doors opened—

—and someone charged out of the doors and ran into me at full speed. Thayu shouted. I fell backwards and crashed onto the platform on my backside.

The other person had fallen after tripping over my legs, sprawled on his belly. He was now getting up, brushing dust off his clothes. He was young, dressed in black and—

“Reida! Whatever are you doing?”

“Don’t get on the tram. There’s Tamerians. Run!”

He didn’t say where the Tamerians were, and as I scrambled to my feet, I didn’t see any, but despite his tall tales, I’d never known Reida to lie.

“Come!” I turned around and headed off the platform with Reida. Thayu and Lilona were behind me. “Where are the Tamerians?” I asked him. “I managed to give them the slip at the next station. They’re waiting for us there. They’ll probably find out that we didn’t get on the tram soon. They’ll be running this way.”

“I think we’re better off walking through town,” Reida said. “I have some news and you may want to act on it.”

“Do you know where Evi and Telaris are?”

“They’re at the previous station trying to keep the Tamerians in check.”

Damn, I hoped they were safe. I hoped Asha’s guards were there as well.

I stopped. While we had been going at a decent jogging tempo, Thayu and Lilona had fallen behind. Thayu was standing with her hands at her sides, the pose she took when she was annoyed. Lilona stood doubled over, panting, supporting herself with one hand on a wall.

No exercise aboard that ship, huh?

Thayu spread her hands, clearly annoyed. “We can’t protect her going through town when she can’t run when we need her to.”

True. “Maybe we should get that water taxi after all.” And here I was thinking that I was unfit and weak.

“No,” Reida said. “There are more Tamerians on the outside of town than inside. Once we’re on the water, they’ll only need to pick us off. There is no shelter out there. They have excellent night vision.” In contrast to one of the “mistakes” supposedly made with the Coldi people.

I said, “We need a vehicle. It’s a good run from here to the airport and we should take her back before we do anything else.”

“She won’t survive a run across the island,” Thayu said, her voice dark.