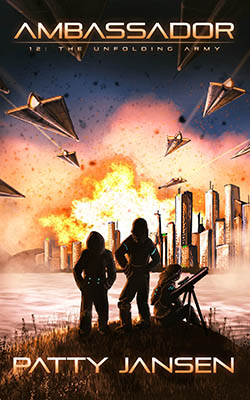 Ambassador 12: The Unfolding Army is book 12 in the Ambassador series

I was on the way back and in view of the bus when I spotted movement in the undergrowth.

At first, a white and brown goat shot out of the bushes. It ran across the road, realised that the wall around the Exchange complex was in its way, then did a sharp left turn and ran off down the road.

Deyu lowered the weapon she had pulled out.

Reida came out of the bus laughing, but Deyu raised the weapon again, aimed to the left of where I was coming back up to the bus and discharged.

A discharge always made the hair on my arms stand up.

A split second of utter silence was followed by a heavy thump of something falling down in the bushes and dead wood.

Mereeni jumped from the bus and she and Reida ran across. I took my weapon from the bracket on my arm and ran to the bus.

Most of the others had come onto the road. Sheydu, Isharu, Nicha, Evi and Telaris, and Ynggi. They all stood around the vehicle protecting it like a wall of armour and weapons.

Asha’s guards had dispersed across the closest section of the road. All had pulled on their helmets.