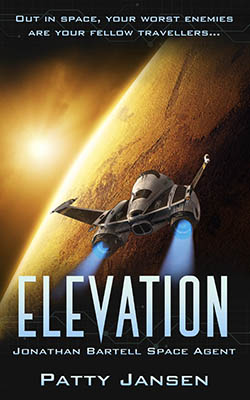 Elevation is book 5 in the Space Agent Jonathan Bartell series

Verona Rupes, on the ice moon Miranda, is the tallest cliff in the solar system. If you jump off the top, it takes 700 seconds to reach the bottom. What can you do in the most important 700 seconds of your life?

Jonathan and Gaby arrive at the ice moon Miranda to work with a local researcher and find that adventurists have snuck into an area infected with alien bacteria and have gotten themselves in trouble.

Do these people have to be stopped because they’re about to spread a bacterial infection to the human settlements or are there other factors at play? A tale of petty vindictiveness, competition and jealousy. Oh, and a wedding.

All of a sudden, the people in the control room went quiet. Backs straightened. A coffee cup disappeared under the desk. The staff nodded polite greetings.

Someone had come into the room behind Jonathan and Gaby.

The newcomer was a stiff-faced man in officer uniform with patches that identified him as Major in the Auxiliary Division – Research B. Vika.

He was quite tall with dark eyes, dark hair and the overly bronzed skin that was quite common amongst inhabitants of the outer system bases who spent too much time in the solar capsules.

“There you are, finally,” he said, meeting Jonathan’s eyes.

Jonathan glanced at the Control Centre workers, all of them lower-ranked officers. This guy was really that scary, huh?

“I’m sorry about the delay. We were just about to come and meet you,” Jonathan said.

The man held out his hand. “I’m Bernard Vika. Senior Research Officer of Miranda Base Station.”

Jonathan shook his hand. “I’m Jonathan Bartell, and this is Gaby Larson, my partner.”

It felt good to finally be able to say that, and to mean the word partner in all possible interpretations of the word.

“Pleased to meet you,” Gaby said in her professional voice.

They started walking, out of the control room.

“What did they want over there?” Bernard asked while they walked down the corridor.

“We almost had a run in with some object just when we were coming into the base,” Gaby said. “The pilot wanted to file a report and asked us to file witness reports. We were witnesses, so we—”

“Young could have told me.”

Whoa. This character was not to be messed with. Jonathan said, “I’m sorry, I should have notified you, but usually in small bases, news like this travels quickly and I thought you would have heard about it—”

“A shuttle almost hitting something? There are small chunks of ice all over the place. They exist at low altitude because of the low gravity. I don’t know why Young wasted your time in this manner.”

Jonathan didn’t think it was an ice chunk, but he let it rest. After all whatever they had almost hit was not important. Authorities would sort it out.