Innocence Lost is book 1 in the Ghostspeaker Chronicles series 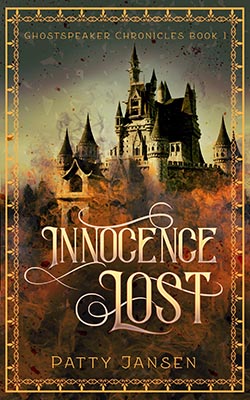 She wanted to run her father’s business. She got a mad prince, demons, ghosts and a kingdom in debt.

“I really started to feel for Johanna when she went on the run, because she had to deal with devastation wherever she went, and it took a toll on her. She’s also looked at as the leader of her little ragtag group (3 other people, including a strange friend, Loesie, who can only make sounds instead of regular words), something that wears on her as well. It was all so sad, yet Johanna managed to stay strong, which I really admired. There’s sort of a twist near the end of this book which had me chuckling which helped to relieve some of the sadness that came just before. Of course, it ended in a way that leads into the next book, though you’ll have to read this one to understand what I’m talking about. :-). –Amazon Reviewer”

“OMG, I can’t wait to read book two as I could not stop reading this book!! –Amazon Reviewer”

Buy Innocence Lost direct from the author with delivery by Bookfunnel