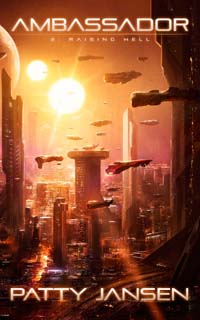 Ambassador 2: Raising Hell is book 2 in the Ambassador series

The second-quickest way to get yourself killed when dealing with Coldi people of the planet Asto is to look a superior in the eye. The Coldi people possess an instinct that demands the formation of hierarchical networks in which every person has a prescribed place. These networks provide stability. They also place one person at the top.

After having been released by his previous employers, Cory Wilson not only depends on Ezhya Palayi for his income, but he has developed an unusually friendly relationship with this man whom people on Earth would call an absolute dictator, but whose reign is benign.

The third-quickest way to get yourself killed when dealing with Coldi people is when the leader you depended on for support is suddenly no longer there, as when he goes missing because the system society relies on for interstellar travel goes down.

In a highly-strung hierarchical society, it won’t be long before someone else tries to claim the top spot, someone less benign, someone aggressive who is likely to destabilise peace between Asto and other worlds.

But by far the quickest way to get yourself killed is, as a non-Coldi outsider, to visit Asto and try to interfere in their hierarchical system, to mess with instincts you don’t feel yourself, and people who are much stronger than you.

Oh, and did you know that the average daytime temperature is well over 50 degrees C?

“It takes quite a bit of skill to develop a human, but not yet human species and make it hang together. Cory, the main character was once again a great read. I’ve lived in the Pilbara in Western Australia, and Patty Jansen truly captured the excruciating discomfort of overheating. At points in the story I felt as if I was back there, working hard in the baking sun and feeling the fluid being sucked out of my body by the unrelenting heat.–Amazon reviewer”

“I am usually not attracted to this style of book with its political intrigue. However, this one encompasses cloak and dagger, good pacing, and characters I have come to know and like. In other words, I am completely hooked. It has caused me some sleepy mornings as I can not put it down ant night. I bought the next one immediately after I finished this one.–Amazon Reviewer”

“So. This counter-writ. How is that going to work from here, while we’re locked up? Who would carry it out? To be honest, I’m not a fan of sending someone a piece of paper with an order to have him killed for a minor transgression.”

“Another strange habit of your people. This thing called mercy.” He used the Isla word. “If someone has committed an offense, why lock them up, feed them and then release them when they’re angrier than when they committed the offense and will only re-offend?”

“We have a forgiving nature.”

“And you also have some of the most violent conflicts in all of the settled worlds, some of the greatest mass murders of people by people, by their own leaders, or by other leaders.”

And Asto’s colonisation had been aggressive, but they had barely shed blood and despite the fearsome size and know-how of their army, had rarely fought any wars.

I’d had this discussion with Nicha so many times and he always won it.

There was something about Coldi nature that Earth people could learn a lot from, if we could only determine what it was.

“Please, Delegate—Cory—listen to this because it is important advice. Taysha has offended you deeply. You have played along with him to appease Ezhya. But through offending you with these further requests, Taysha has offended Ezhya as well. Our laws are very clear in this respect. Trust has been broken. You have the right to issue a writ to Taysha. You should do this, so as not to set a precedent that people in power can mess around with foreigners unused to our laws.”

“Is that what you would do? I don’t mean if you were Ezhya, because . . .” Ezhya rules everything. “But if something like this happened to you, or Natanu, would you send him a writ?”

“No. Any of us would go straight to his private rooms and shoot him.”