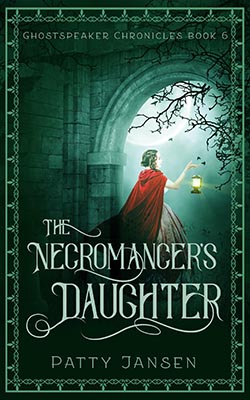 It was at dusk on a warm summer evening that Queen Johanna of Saarland walked through the palace hallway accompanied by two guards, each carrying an oil lamp to light her way. She had been sitting in the private sitting room when the guards had come to call her. Apparently a visitor had come to the palace. The guards wouldn’t say who it was, only that he waited in the garden room.

As she followed the guards across the hall into the large ball room where their footsteps echoed in the empty space and the flapping flames of lamps in sconces did weird things with shadows, several scenarios played in Johanna’s mind, none of them pleasant.

It could be a representative of the Belaman Church, unhappy with the accusation that they had been trying to control Saardam through a magical relic. That accusation had proven very hard to kill, even if Johanna herself didn’t believe there was much truth in it. Yes, the relic had come from the holy city of Seneza and had been sent to the Shepherd Victor, leader of the Church of the Triune in Saardam by someone dressed as a monk, but Johanna refused to believe that the Most Holy Father Severino of the Belaman Church would sanction such a thing. Or if he did, he could not possibly be terribly holy. Which, in itself, would be a scandal of the first order.

It would be better then, that the visitor was someone from Saardam’s nobles, who were still sour over their loss of position when King Roald had taken the throne, and more recently, the death of one of their young men. Young Auguste had fallen off the deck of a ship where he wasn’t supposed to be, and although the nobles wanted to accuse someone of his murder, all the signs showed that it had been an unfortunate accident that had revealed some of the young man’s illegal activities. Johanna didn’t think the nobles had any reason to accuse, nor draw attention to the young man’s activities.

But maybe the visitor was an envoy from any of the guests about to arrive in the city to negotiate potential investment in Saardam’s gutted port. They were Kings and Barons and Princes, as well as a slew of folk with commercial interests who would be tagging along.

But it was the first group—the foreign nobles—that had taken Johanna a disproportionate amount of time in dealing with. Heaven knew King William had been difficult enough already, almost to the point where Johanna wished he’d declined involvement in the project, and he hadn’t even arrived in the city yet.

The start of that meeting was less than a week away. The men and their entourage were about to arrive in Saardam, to gawk, to bicker, and hopefully to agree on a few things or put down sorely-needed deposits on sorely-needed facilities.

The palace was being readied for that event. For weeks, the palace servants had been run off their feet, building, painting, fixing, cleaning, furnishing.
Already, they had put tables and chairs in place for the dinners that would be held in the formal ball room, the hall that Johanna now traversed in the darkness and where her and the footfalls from the guards’ hard-heeled boots echoed in the large space.

The tablecloths were still in the linen cupboard, safe from the sparrows that came into the room when the doors were open, and that lived in the bay window inside the domed roof where no one could reach them, and that would leave little reminders of their presence on the pristine white cloth.
The guards led Johanna through the doors to the side of the hall into the garden room. Looking towards the west, the many windows and glass doors of garden room caught the last of daylight, a mere orange glimmer on the horizon.

Every time she came here, a little shiver went over her. This was where she had seen many men killed during the first attack on Saardam by Alexandre’s bandits, and where she had seen the ghost of Princess Celine crack the stone slab in the ground and rise from the grave. The bodies of the soldiers had long since been removed, the broken glass swept up and the headstone replaced, but the foul magic atmosphere lingered like something had died here and the decomposing juices had seeped into the stone, and could not be removed by any amount of scrubbing.

A single lamp burned in the room, casting a pale yellow glow over the floor and stone that marked Princess Celine’s grave. A bench stood there these days, for Johanna liked to sit here in the afternoons when the low sun set over the wide expanse of the river, the marshy shore on the other side and the sand dunes that sheltered Saardam from the force of the sea. She would sit, pray to the holy Triune and contemplate all they had lost and all that needed to be done. It was not a pleasant thing, to come here, but she felt she owed it to Roald’s sister and his parents.

Today, someone else sat on that bench.

As Johanna came in, the dark-haired young man turned around and rose at the same time. The orange glow from the flame showed his olive-skinned face with a pair of clear, alert eyes the colour of the night.

His mouth spread into a smile.

“Oh,” was all Johanna could say. Her heart jumped.

She hadn’t seen Li Fai for over two months, had been avoiding him because… because that subtle, polite smile ignited a warm feeling in her that reminded her of all the reasons why she was avoiding him.

And by the Triune, did she understand why she was avoiding him, because in his quiet, unassuming way, he was heart-stoppingly handsome.

He wore locally-made clothes that were classy because of their understated simplicity. No excessive frills on the collar, no garish patterns on the trousers. He’d also done away with the jacket and wore only a plain waistcoat. It was warm enough.

“You look… different,” he said.

“What, this?” She put her hand on her swollen stomach. It had grown very big and round. She would joke that her dress could double as an army tent. At any rate, she had said goodbye to her toes and would not be able to see them until after the child was born. Still a month to go, Helena said. Just enough time to get these meetings with kings and barons and dukes over and done with.

Li Fai said, “I haven’t seen you for so long. I wanted to teach some magic, but you are always busy.”

“I understand.” He looked down. The light gilded his face, the skin soft and smooth. He was about as tall as she.

A little uncomfortable silence followed, in which she would have liked to say something about how much she enjoyed learning about magic and hearing the stories about the “art” boxes that children in his country received if they had any magic capability. But she couldn’t say that because the guard stood behind her, and she was unsure how much the guards knew about magic, or how much they knew about all the other things that had gone on in the Shepherd’s house or before.

And the silence was painful because she didn’t want it to be so awkward and uncomfortable. She wanted to talk and laugh, and practice magic.