Ambassador 6: The Enemy Within 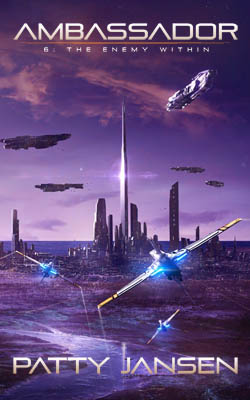 Ambassador 6: The Enemy Within is book 6 in the Ambassador series

Two men went on a surfing trip in a remote area. Only one came back, accused of murdering the other.

Not quite, because the alleged murder happened on another planet, the accused is a member of the secretive Pretoria Cartel of super-rich business tycoons–with illegal off-Earth ventures–and the only person who can remotely be called a witness is an alien, the elder Abri from the Pengali Thousand Islands tribe.

Diplomat Cory Wilson is asked to accompany Abri to the Nations of Earth court, but when he and his team arrive there, their contacts have been moved to different cases, their rooms are bugged and their movements restricted. No one is answering their questions, but it is when a lawyer is murdered and Cory’s team captures a mysterious stalker that things get interesting.

Just as well they are prepared in the usual way: alert and highly armed.

Praise for Ambassador 6: The Enemy Within

“The political wrangling and despicable behaviour of those in power is what makes these books come alive.–Amazon reviewer”

“So much enjoyed this latest installment in the Ambassador series! So much happens to these characters I’ve grown to love and there’s so much more to come. And really I enjoyed getting to learn more about the Pengali’s customs and people.–Amazon reviewer”

I turned around. Devlin had come into the room, his trousers dripping wet.

I thought of the poor goldfish in the pond in the foyer, or the canal across the road. I rose, heart thudding. “What’s going on?”

“It is that brat. She managed to detach a piece of metal from the wall in the bathroom in the Pengali room and now there is water coming out and we can’t stop it.”

“Show me.” We left the dining room. I stopped at the reception on the way, and suggested that they might call a plumber because there might be a leak. I checked the status of the goldfish—they were still swimming around. Phew.

While the hotel staff scrambled to find someone to check it out, I followed Devlin upstairs. In the corridor I could already hear the sound of gushing water and voices.

Abri stood just inside the door. Her mouth fell open when I came in, fearful almost. I strode past into the bathroom, where Kita and Ynggi were trying to push the tap back onto the wall. Each time they pushed the metal against the hole, the water squirted everywhere. The floor was covered, the towels were dripping, the ceiling was wet.

I went back to the room’s entrance where I opened the cupboard door. With a bit of luck—ah, yes, there it was. I turned the tap. The noise in the bathroom stopped.

At that moment, someone knocked on the door. I opened it, finding a man in overalls in the hallway. “Problem with the taps?”

“You can say that again.”

Ynggi came out of the bathroom. He was soaked, and had seen the sense to take off his clothes. That was what people would do in Barresh.

But the technician’s eyes widened at the sight of a slight, humanoid figure with giraffe-patterned skin and black-and-white banded tail who was otherwise completely naked.

Well, at least now I needed to field no more silly questions about whether Pengali were patterned down there because he could see that they weren’t.