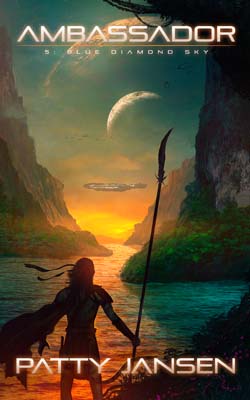 Ambassador 5: Blue Diamond Sky is book 5 in the Ambassador series

Cory has a list of all humans in Barresh: it’s very short and no one is missing. A few days later, he receives a curious message through official channels, from a woman on Earth whose rich businessman husband went on a trip of a lifetime “in a place where you can surf with plesiosaurs in turquoise waves”.

Cory knows the guy advertising the trip. He’s a shady character. He also knows where the “plesiosaurs” are. They’re not particularly friendly. Not to mention that the area is on the land of a viciously territorial Pengali tribe.

“Many times by book 5 in the series the stories become predictable. It’s easy to fall into a trap of writing a story to appeal to fans without developing the characters and the world more. Not here. –Amazon reviewer”

“This starts a new mystery to be continued in the next book. There were plot twists, and we saw more of the planet where Cory is living. We are also introduced to some of the natives of the world who have been ignored and slighted by the “more advanced” peoples. Perhaps this echoes the challenges of native peoples on earth. –Amazon reviewer”

It was an ad, laid out in a sparse, professional style. There was a picture of a couple of rocky islands with greenery on top protruding from a turquoise ocean. Underneath it said, “A place of unrivalled rugged beauty, where you will be guaranteed to find privacy and walk on beaches where no human has walked before.” In smaller letters, it extolled the virtues of the company, called Exclusive Adventures, and they included, “exquisite food catering for all dietary requirements” and “guaranteed confidentiality”. It said, “If you travel with us, we guarantee that no one else gets told about your adventure, so you can keep coming back to your favourite spots year after year, without the risk of your locations being spoiled by other tourists.”

I took in a sharp breath. Plesiosaurs. Beisili.

A message in a bottle.

Amarru did, and her face returned to the projection, looking concerned. “Cory?”

“I think I know what this is about. This is my missing man, the sender of the message. Who is it? What’s he doing in Barresh? How did he get here if he didn’t show up in the Exchange records?”

“I don’t know. What are you talking about?”

“You mean, you don’t know? You always know everything.”

“What am I supposed to know?” Why did I always forget that she had no sense of humour?

I quickly explained what had happened to us in the past few days and why I had been trying to find people from Earth through the Exchange.

She frowned deeply. “So you think this is the same person?”

“There is no doubt. It talks about surfing with plesiosaurs. I just did that, a few days ago. They’re called beisili and they’re not all that harmless.”

“But why the note in the jar? I’m guessing this man would have been with a guide. Where is the guide?”

“Obviously something happened. We had a big storm a few days ago. Maybe their vehicle flipped or sank and he managed to get himself to an island but there are no other survivors.”

“Ugh. What are the chances of him surviving for any length of time?”

“Depends on if he’s injured and if he happened to have landed in a place that has fresh water. Some of those islands don’t have any. Or if there are hostile tribes.”

She blew out a heavy breath. “I don’t like this at all, Cory.”

“Really messy, for us, too. I checked and we have no records of him leaving Earth through the Exchange.”

“How is that possible?”

“That is a very good question, but it’s highly likely he travelled on someone else’s ID, and that seems very odd for a legitimate tourist operation. In fact, the whole thing is odd. No one runs tourist trips off world. Not from Earth at least. Too much hassle, too expensive.”

“This gig is only for very rich people. Have you seen what this company charges?”

“Yeah.” But she didn’t sound convinced. Amarru, who rarely left the Exchange complex, had very little idea of how little money some people had and how lucky she was not to have to worry about living expenses.