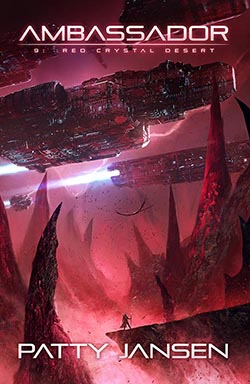 Ambassador 9: Red Crystal Desert is book 9 in the Ambassador series

The conflict has brewed for generations, until it has become too big to handle.

Cory and his association finally return to Asto on the invitation of his father-in-law, for his official induction ceremony into the Domiri clan. They are housed in a magnificent villa overlooking a valley, away from the hustle of cities or the military base.

But why can’t they stay with their host? Is it for security? Is it because their host fears upsetting his household?

With Thayu heavily pregnant, Cory has no appetite for adventures. But something is brewing, and listening bugs, a nightly attack and invasion are all part of the deal.

Wouldn’t it be nice if for once Asto’s elite was upfront about the nature of the problem?

“I have read every book in this series. From the very human main character (Cory) to the colorful worlds to the equally colorful characters, these book shine with imagination and relatable storylines. I love this universe she has created and wish I could be part of it. I can say that the one thing I don’t care for is that the book ended. I want to keep reading……”

“As soon as I finished Ambassador 9 I was looking for Ambassador 10. This is just as good as most of the rest of the series. Kudos to Ms. Jansen. A fine read.”

The sky went dark. The wind howled between the rocky spikes. The rain sheeted against the side of the craft. I’d lived in tropical Barresh for years, but I had rarely seen this much rain in my life.

For some reason, the satellite array Isharu and I had set up suddenly kicked into life.

Reida managed to connect to the weather scans, and brought up a three-dimensional projection of indistinct blobs of varying colours. Leisha just stared at the image.

“I know this area reasonably well, and I can’t even tell what I’m looking at,” he said.

Sheydu, Anyu and Isharu crowded at the back of Veyada’s seat, blocking the projection from my view. They pointed at what they thought were geographical features, and discussed which parts were rain.

“What’s that?” Isharu asked, pointing at an area that showed up white in the scan.

Leisha said, “I don’t know. The air is too dense and the scan doesn’t penetrate?”

Anyu looked over his shoulder. “No. It’s water. The Crystal Wastelands are a depression. It’s filling up with water.”

Sheydu gave her a concerned look. Sheydu did not like water. “Should we find shelter while we still can? I’m sure we can find a cave in the cliff face.”

“The craft is designed to float,” Leisha said. “It’s much safer to stay inside.”

Seeing my previous experience with rain on Asto, I thoroughly agreed with that. I pulled up my bag and checked the presence of the mask and air tank inside it. We might need them.

Veyada and Anyu kept a close eye on the white area, but even from my position, where I could only see the screen from an angle and in between people’s backs, I could see that the white area was expanding rapidly.

Puddles formed on the ground around us.

And then— “Whoa, what’s that?” Sheydu was looking out the front window. The alarm in her voice was most uncharacteristic.

I peered into the murky semidarkness through the water lashing the outside of the window. Something out there was moving. Flashes of white came up and vanished.

“What is it?” Veyada said. “It’s like the ground has come alive.”

“Notice how much more water there is on the ground?” Isharu said.