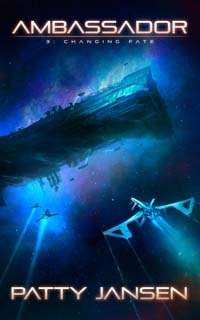 Ambassador 3: Changing Fate is book 3 in the Ambassador series

“The author has a vivid imagination, and is constantly coming up with new plot twists. The characters are complex, and Cory manages to stumble his way through some scary situations. His Coldi wife, associates, and employer also keep things interesting. I have read four books in the series and plan to buy Ambassador 4.–Amazon reviewer”

“The first book in this series was my introduction to Patty Jansen, and it was absolutely compelling. Thereafter, I bought the second one in the series and it was just as rivetting. I have now completed the third equally rivetting volume and look forward to the fourth. Patty Jansen is definitely in the league of the absolute best sci-fi writers of all time. The stories are brilliantly visualized and beautifully written. Hugely enjoyable and strongly recommended. Thank you so much, Patty!–Amaon reviewer”

The office had been well and truly trashed. All of Federza’s elegant furniture smashed to bits. They’d even put gouges in the wall. Why?

I stepped over the debris to the desk. In the wall behind it was a cupboard that had contained electronics. The pieces of equipment lay in fragments on the floor, readers and projectors and timers and Trader-related equipment which I didn’t recognise, even a device that looked suspiciously Earth-made—

There was a tiny noise.

I froze and held my breath.

Veyada, next to me, also stopped and grabbed for his gun.

For several long moments, we stared around the room. Any cupboard doors that Sheydu had not safe-tied stood open. There was no way that anyone hid in there. The door in the opposite wall led to a small kitchen where there was a bed along one wall. The little room had no windows. No one could hide in there either. Not after Sheydu had checked.

Thayu scanned the room with her infrared scanner again. I could see the screen over her shoulder—and then remembered the fight in the foyer in front of Ezhya’s private apartment, where attackers had hidden in the dome. There was a manhole in the ceiling. It was probably not obvious to people—and software—unfamiliar with Barresh architecture. Thayu used an Asto-made scanner.

I met Veyada’s eyes and looked up. He noticed the manhole.

Sheydu and Thayu now also looked up. Veyada sneaked around the room, carefully stepping over debris without making a single sound, keeping his gun pointed at the manhole. Thayu dialled up the sensitivity and scanned the ceiling. A very faint and indistinct lighter-coloured blob showed up. She showed it to Veyada, who aimed his gun and fired at the ceiling. The charge went straight through, and left a bright white trail on Thayu’s scanner. It left a blackened hole in the plaster, but otherwise missed the lighter blob. On purpose, because Veyada wouldn’t miss at this distance.

There was another scuffing noise. Now I could see clearly how the grey blob moved.

Veyada shot again, now hitting the ceiling on the other side of the blob. Bits of ceiling plaster rained down. “If you come out now, we’ll let you live.”

Sheydu dragged the desk under the manhole and found a chair that still had enough legs to stay upright. She climbed on the desk, hauled the chair up, put it on the desk and climbed on. She had to bend her head to stop it from hitting the ceiling.

Thayu motioned me to the door with her gun.

I retreated into the corridor.