The second-quickest way to get yourself killed when dealing with Coldi people of the planet Asto is to look a superior in the eye. The Coldi people possess an instinct that demands the formation of hierarchical networks in which every person has a prescribed place. These networks provide stability. They also place one person at the top. <pEzhya Palayi is that person.

After having been released by his previous employers, Cory Wilson not only depends on Ezhya Palayi for his income, but he has developed an unusually friendly relationship with this man whom people on Earth would call an absolute dictator, but whose reign is benign.

The third-quickest way to get yourself killed when dealing with Coldi people is when the leader you depended on for support is suddenly no longer there, as when he goes missing because the system society relies on for interstellar travel goes down.

In a highly-strung hierarchical society, it won’t be long before someone else tries to claim the top spot, someone less benign, someone aggressive who is likely to destabilise peace between Asto and other worlds.

But by far the quickest way to get yourself killed is, as a non-Coldi outsider, to visit Asto and try to interfere in their hierarchical system, to mess with instincts you don’t feel yourself, and people who are much stronger than you.

Oh, and did you know that the average daytime temperature is well over 50 degrees C? 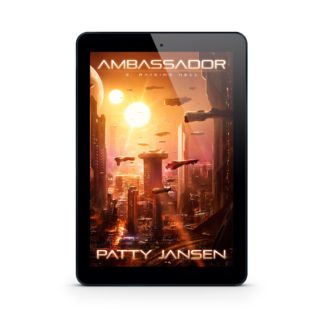