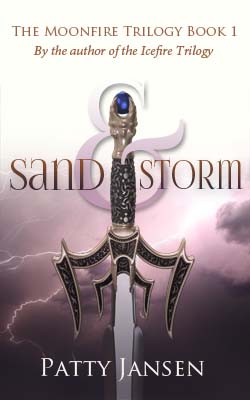 Sand & Storm is book 1 in the Moonfire Trilogy series

The ancient machine that produced icefire was destroyed twenty years ago, but the deadly magic is again on the increase. No one understands why or where it’s coming from.

Meanwhile two young meteorology students make a string of discoveries that will change the way the people understand the world. They’re on the threshold of the age of enlightenment, but vital knowledge necessary to save their world may well get lost when war overruns the inhabited world.

“This book starts twenty years after the last one ended, with new dangers threatening characters we already know and many added to enrich the tale. If you loved the first trilogy, as I did, you’ll love this book as well.–Amazon reviewer”

“A wonderful story full of creative mechanical and mythical tales and people.–Amazon reviewer”

Zaina unlocked the door to her room—and found it was already open. That was strange. She remembered locking it this morning. She didn’t give the cleaners permission to come into the room when she wasn’t there.

As she stepped into the room, the thought flitted through her mind that maybe it wasn’t such a good idea and at the same time she noticed the dark silhouette, knew it was too late, and a man grabbed her around the bottom half of her face, his hand across her mouth, while wrestling her into the room and pushing the door shut with his backside.

Zaina grabbed the arm that held her with both her hands and tried to pull the hand off her mouth. It smelled like tobacco—Aranian tobacco. The man was too strong. He dragged her to the hard-backed chair that stood at the table against the wall and pushed her down.

“Not a word or I’ll kill you,” he said in Aranian. Damn it, by his accent she suspected that this was someone from the Royal Service.

He let go of her mouth and tied her hands behind the chair.

He lit the little oil light that stood on the bedside stand. When he came around the front of the chair, it backlit his silhouette.

He was tall and broad, a mountain of flesh and muscle. Most of his head was shaven, with the exception of a round patch on the crown of his head, where he wore a ponytail, dark and glistening with oil, the plait fastened with several metal ties.

The skin on his head bore red tattoos. It was not just someone from the Royal Service. It was Prince Nayek himself.