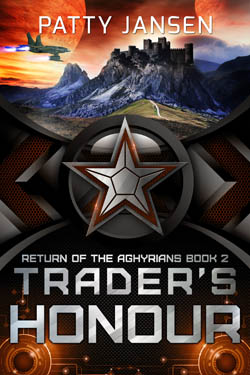 To her surprise Iztho Andrahar, from the city’s most prestigious Trading family, has agreed to take her on. That is where her troubles begin.

Mikandra has nowhere to go, except try to help Iztho’s brothers prove their innocence.

In her last meeting with Iztho, he mentioned getting married to a woman from neighbouring city-state of Barresh. Iztho’s brothers know nothing of this, and think she is crazy.

Going to Barresh by herself while never having left the country is probably not the smartest idea, but she’s desperate for the family’s licence to be restored, because without her job, she’ll be homeless.

“This book introduces an entirely new main character and plot-line for the series, developing the new story well until it is integrated into the stories & characters we met in previous books. The initial mood is dark, and the main character resists feeling hope, but the ending (which is hopeful) feels true to both story-lines. Full of excitement and action, and a fascinating look at how different cultures react to emotions and threats. It may be targeted at young adults, but will capture and pleasure older readers as well.–Amazon reviewer”

“Trader’s Honour deals quite a bit with notions of how societies (should) work. The Mirani have two classes of people, the nobility (which includes Mikandra) and the working classes. The noble class not only limits the prospects of its women, but also believes that it’s their duty to protect and care for the lower classes. As we learn quite early on, they don’t do as good a job as they could. By contrast, Barresh, the other continent, is thought to be primitive and more or less useless. But when Mikandra arrives there she finds that, yes, it is very different (there’s a bit of appropriate culture-shock on her part). Over time she learns that different does not mean worse, not the way the other nobles think, and starts to see a lot of potential around her. It made me think of biases against developing countries and how some are actually the world’s fastest growing economies.–Tsana Dolichva, Australian book reviewer”

THE ENVELOPE LAY in the middle of the table, between the silver tableware and the gold-rimmed plates. A bowl with rolls of fish bread stood on one side, and a steaming terrine of bean soup on the other. Father, dressed in his Lawkeepers tunic, sat at his usual place at the head of the table, Mother on the other end and little Liseyo with her silken hair on Father’s right hand side. Old Rosep stood at Mother’s elbow while ladling soup into her plate and talking to her in a low voice. All of them were looking at that envelope.

Mikandra hesitated in the doorway. Her face still glowed from having run from the hospital against the biting wind to be home in time for dinner. Father cast a Meaningful Glance at the envelope, and then met her eyes in that severe way of his that said Young lady, I demand an explanation.

Mother stopped talking to Rosep, and Rosep scurried out the room as fast as his sore knees and bow legs allowed, shutting the door behind him with a soft snick. The fire popped.

“Good evening, Mother and Father.” Mikandra sat down at her regular spot at the table, facing Liseyo, who looked at her with large eyes.

Into the heavy silence, Mother said, importantly, “A Trader Guild courier brought this for you this morning.”

Totally unnecessary. The envelope could have been anything if it wasn’t so unforgivingly carmine red, and that colour meant only one thing: Trader Guild. And the Guild only ever used couriers to deliver these types of messages.

Mikandra licked her lips and, avoiding her father’s penetrating gaze, picked the offending object off the table. The paper was heavy and smooth in her hands. It exuded a faint smell of ink, which was old-fashioned and classy all at once. A white label affixed to the front held her name, written by hand by the Guild’s calligraphers in Coldi and Mirani script. Mikandra Bisumar. As if there was any doubt.

She clutched it on her knees, out of the reach of her parents’ penetrating gazes, and met Liseyo’s eyes, whose expression said, Well, aren’t you going to open it?

Mikandra didn’t want to, not here where her parents were watching her, not now, before she’d sorted out this part of her future, because certainly, the Trader Guild wouldn’t use a courier if her application to the academy had been rejected, would they?

The thought filled her with panic. She hadn’t expected a reply so quickly; she had expected a rejection, because almost everyone who didn’t come from a Trading family got rejected, right? Because at night in bed, she’d been telling herself that she was full of stupid dreams to even have applied and that she should prepare herself to bandage frostbitten fingers in the hospital for the rest of her life. And if her dreams ever came true . . . well, didn’t the older people say that dreams looked good when you were young, but seemed silly in a yeah-like-that-is-going-to-happen way when you were older?

Going to the academy had been such a silly dream, something she’d never seriously thought would happen, but now she had this letter and all of a sudden, the dream that had been her childhood wish became frighteningly real.

She didn’t want to open the letter at the table while her family was watching.

But Father would never let her leave the room. He’d stop her before she could reach the door, grab her by the arm and lift her up so that her shoulder would be jammed up against her ear and that his fingers would dig into the soft flesh under her arm and demand that she show him the contents. She still had the bruises on her arm from last time he’d done that. That time it had been about her not wanting to audition for the boring classic theatre. This was worse. Much worse.

He said, in his hard and unforgiving voice, “Open it, daughter.” In that unemotional tone that masked his worst kind of anger.

Mikandra turned the envelope over and prised her fingers under the seal. The waxy paper ripped. Her hands trembled and made sweat marks on the red paper.

Folded inside the envelope she found a cream-coloured sheet and some printed papers, all in the antiquated dialect of Coldi which was the official language of the Trader Guild.

She spotted the words Registration details at the top of one of the sheets.

Her heart thudded like crazy. The field of her vision narrowed while black spots danced in the edges. It was as she’d hoped, dreamed and feared.

The very large, looming, huge problem of course was that this response came before she’d worked up the nerve to tell her parents that she’d applied.