To her surprise Iztho Andrahar, from the city’s most prestigious Trading family, has agreed to take her on. That is where her troubles begin.

Mikandra has nowhere to go, except try to help Iztho’s brothers prove their innocence.

In her last meeting with Iztho, he mentioned getting married to a woman from neighbouring city-state of Barresh. Iztho’s brothers know nothing of this, and think she is crazy.

Going to Barresh by herself while never having left the country is probably not the smartest idea, but she’s desperate for the family’s licence to be restored, because without her job, she’ll be homeless.

Trader’s Honour is the second volume in the Return of the Aghyrians series, a series of four interconnected standalone novels.

This volume tells the story of Mikandra Bisumar, who is thrown into a world of danger when she defies her authoritarian father to accept a hard-fought offer to go to the Trader Academy.

Of course she never asked to become part of a political movement against her own government, but the signs of impending trouble were everywhere, and she had been powerless to act on them.

Being associated with a powerful Trading family and no longer beholden to her father gives her the push she needs.

But her mother and sister are still in the clutches of her father and the dictatorial government. Also, it is by no means certain that the Trading business that has taken her on will survive the turmoil.

It all hinges on one thing: can she prove that the accusation of wrongdoing is false? 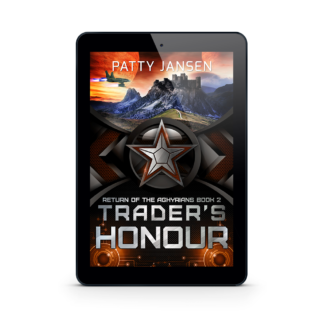 You're viewing: Trader’s Honour (Return of the Aghyrians Book 2) $8.99
Add to cart