The Idiot King is book 3 in the Ghostspeaker Chronicles series 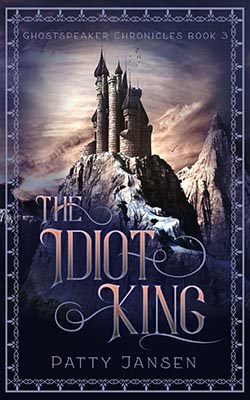 THE LETTER was written in cramped, barely literate hand. The writer had used cheap paper which turned pen strokes into blobs and did not improve its legibility. Neither did the poor light that fell into the boat shed through the open front.
Fleuris LaFontaine had given the letter to Johanna only after she had specifically requested to see it, twice, when Master Deim had asked him to give it to her and Fleuris could no longer go on ignoring Johanna’s presence. He had pushed it across the rough wood of the simple table with his be-ringed, delicate hand, wrists barely protruding from the lace cuffs—dirty lace cuffs to be sure. Nothing in the refugee camps was still pristine.
Johanna had taken the letter, coolly, chin in the air, and said, “Thank you.” She’d unfolded the sheet, making sure that the men in the room wouldn’t notice that her hands trembled. Those men continued their discussion, as if she weren’t there, about the occupation of Saardam, and people who had or hadn’t made it out and assets that may or may not have been destroyed.
Most of it was pure speculation, but they spoke as if those statements were fact.
Johanna had just calmed down from being angry about being told that the Council of Nobles meeting was for men of import and not for wives or consorts, and now she got angry again. This was how stupid rumours started in the camp of refugee Saarlanders, because the nobles speculated idly, and then the other people took their words for fact, Because they were important men. Because people had been waiting for news for weeks and the waiting and endless days of no news were getting on everybody’s nerves.
“What does it say?” Roald, who sat next to her, leaned over her shoulder to read.
She smoothed out the letter.
In loopy writing, it said at the top,
To the Red Baron of Gelre and all he deems notifiable in matters of the city of Saardam.
The date at the top said 14th June, which was barely a week after the fateful day that Saardam had burned. Apparently this letter had been delivered to the castle in Florisheim over two months ago, so evidently the Baron didn’t consider the former citizens of Saardam immediately notifiable. And that in itself said something about what the Baron really thought of the survivors.

I hereby notify the barony that as of today, I have taken up the position of Governor of the city of Saardam on behalf of the Belaman Church and its rightful supporters. All heathens, disbelievers, disciples of treacherous beliefs and followers of dark witchcraft have been purged from the city. Most of the other citizens have been spared and have in fact welcomed our move. No commerce or ships were harmed. We will do our utmost best to resume the river trade as soon as possible.
Your friend,
Alexandre Trebuchet