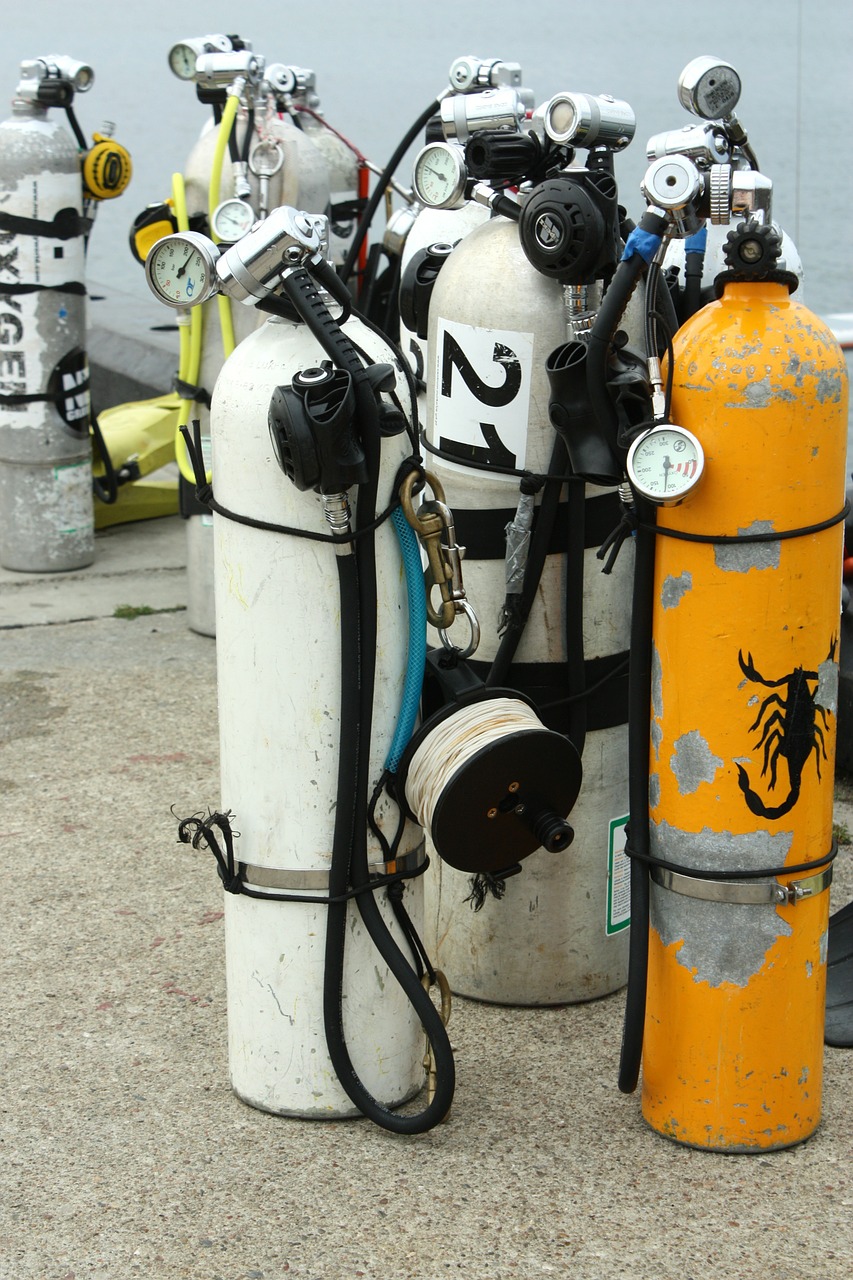 A crash course in SCUBA diving for writers. Because, y’know, I like it when people get it right.

If you go diving, you need two essential parts of equipment: a tank with breathing mask, and an inflatable vest.

Well, you may need a diving suit, because you might get cold. The suit, of course, being made of neoprene rubber, makes you float, so to counter that, you need weights. Quite a lot of weights, usually, and the more slight you are, the more weight you generally need.

Better put on a pair of flippers, too.

The idea is that you + dive gear have a neutral buoyancy underwater. You don’t float, you don’t sink. You swim around and don’t have to do much except move your flippers. It’s a lot more relaxing than snorkelling.

Before the dive starts, like when you jump out of a boat, it’s a good idea to inflate your vest so that you don’t sink straight away, because that’d be annoying. When you start diving, you deflate the vest to a point where you start sinking. By that time you will have put your regulator in your mouth and you can start breathing from the tank.

There are a few very important things to know about breathing compressed air.

Under water, the weight of the water compresses any air inside your body. Because water weights a lot, this happens quickly. At roughly 10 metres, the pressure is double that at the surface. Double the pressure means air will be compressed into half the volume. If you were to take a fully inflated balloon down there, it would look floppy and deflated. This is the air you breathe: twice concentrated.

But because you’re at depth, and air pressure is about a balance, you don’t notice. Except your ears, because they are cavities with air. Fortunately, they are also connected to your mouth and sinuses, so you grab your nose, shut your mouth and blow. Your ears pop. There. Phew. This is also why you can’t dive with a cold, because you would blow your eardrums.

Supposing you went back up. As you do so, the air you’ve been breathing and that’s inside your body expands again. You start  using less of it with each breath because its volume increases. Supposing the air was trapped (like in the tank or in your jacket if you’ve inflated it), . But suppose you held your breath or came up very quickly, what do you think would happen to your lungs? THIS IS HOW DIVERS DIE. You never, ever inflate your jacket or hold your breath when going up. You swim. You do so slowly, to let small pockets of expanding air escape out of the rest of your body.

Make a dive plan. Ten metres is a very common dive depth. Because it gets dark quickly underwater, you find most wildlife in the first ten metres anyway. Because of the concentration/pressure thing, your air will also last you much less long the deeper you go. Plus you have to plan multiple decompression stops, and you want to have enough air in the tank to execute them, so yeah, you have to plan the dive and stick to it. Something like: you dive for 50 minutes at 10-12 metres, have a 2-minute decompression stop at 2 metres to allow the compressed air to escape your body. Anchor chains are excellent spots for decompression stops, but fancy dive boats will have a bar hanging over the side.

What about the bends?

The bends happens when small air bubbles remain trapped in the blood stream (because the diver ignored dive tables or came up too fast). These bubbles will often become trapped in the joints, where they hurt (hence, the bends). But if those bubbles get stuck in the brain or lungs it’s bye, bye.

The bends can happen with shallow dives as well as deep dives. You are likely to get the bends if you accidentally shoot to the surface even from the bottom of a swimming pool. I’ve seen that happen to people, and I can tell you that two weeks in a hyperbaric chamber is not your idea of fun.

Back to air volume and water pressure. Supposing that instead of going up, you wanted to go further down, say, to about 30 metres (which is not a very long distance at all!). At this depth, you have so much water pressing on the air, that every breath is super-concentrated. Air is only 19% Oxygen. Seventy percent of air is Nitrogen. Congratulations! You have now concentrated the Nitrogen in the air so much, that it’s arrived at a concentration where it’s poisonous. Nitrogen narcosis kicks in from about 30 metres. It makes you woozy and unable to concentrate. As part of your Advanced Open Water certificate you have to do a deep dive. I remember distinctly sitting on the sand trying to write something on a slate while a bunch of crazy batfish had taken a liking to the glass in my mask. It was an odd feeling, being unable to remember how to add up (one would say that’s a normal state of affairs for me) or even write your own name. Fortunately, it’s also completely reversible with no lingering effects.

If you want to dive deeper than 40 metres, you need special air tanks and special equipment, and training. This is not the domain of the casual or recreational diver.