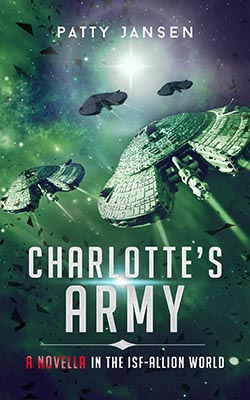 Charlotte’s Army is a Novella in the ISF-Allion series

An army of 7000 artificial soldiers accidentally received the same brain implant: they are all in love with the same woman.

Doctor Charlotte West, the neuro-technologist responsible for the soldiers’ artificial brains, travels in the support fleet. Two months before the arrival at the war site, the marines start fighting each other and disobeying commands.

When they are brought in for tests, Charlotte finds that someone has made a disastrous mistake that endangers the entire space fleet. They’re all in love with her.

“Charlotte’s Army was a quick, enjoyable read. It rounds out the world I’ve read about in Shifting Reality nicely (although I want to stress again that it completely stands alone). I highly recommend it to science fiction fans and anyone interested in giving the genre a go.–Tsana Dolichva, Australian book reviewer”

Dr Spencer looked up from his screen, dishevelled, his hair a mess from passing his hands through it so many times. Deep bags marked the skin under his eyes and the light from the computer screen in front of him made them look worse. “You found something?”

“Yes.” My voice was no more than a whisper. I went into his office and slid the door shut.

He pushed his chair away from his workstation and faced me, his eyes worried and questioning.

“Yes, look.” I went to the other workstation and brought it to life with a single touch of my hand.

He rose from his chair and came to look over my shoulder at the screen. It displayed the text I was too embarrassed to say out loud, of my hair being the colour of autumn leaves, of their love declarations.

Now it was my turn to look at him. He stared at the screen, eyes wide.  ”Dr Spencer?”

He licked his lips and swallowed. His Adam’s apple bobbed.

He staggered back to his chair, sank down and hid his face in his hands, letting out a groan. “Oh Charlotte. I’m sorry, I’m sorry.”

My heart was just about doing loop-de-loops in my chest. “You’re sorry about what? Start making sense to me. What is going on? Why is my name in there?” I knew I sounded more angry than I intended, but the deep affection in the men’s voices, men I didn’t know, disturbed me more than I wanted to admit.