Cory has a list of all humans in Barresh: it’s very short and no one is missing. A few days later, he receives a curious message through official channels, from a woman on Earth whose rich businessman husband went on a trip of a lifetime “in a place where you can surf with plesiosaurs in turquoise waves”.

Cory knows the guy advertising the trip. He’s a shady character. He also knows where the “plesiosaurs” are. They’re not particularly friendly. Not to mention that the area is on the land of a viciously territorial Pengali tribe.

Ambassador 5: Blue Diamond Sky is the fifth book in the Ambassador series.

This book starts a new thread in the series.

On a trip to an isolated beach on the coastline of Barresh, Cory and his team find a message in a bottle, with the word “help” scrawled on scruffy paper. A very Earth thing to do. The message is in Isla, too.

A few days later, a wife on Earth reports her husband missing and so starts an adventure that takes Cory and the team into the remote and hostile territory of the Thousand Islands Pengali tribe who don’t like intruders on their islands, and the large, carnivorous creatures that live in the water between them.

Of course the writer of the message and the missing husband are not the same person. Forces are working in the shadows to keep illegal operations under wraps, and a silly, innocent message in a bottle may just blow the lid on the secrecy.

Cory comes as good samaritan in order to help the wife, but he finds himself in the middle of a galaxy-wide conspiracy. 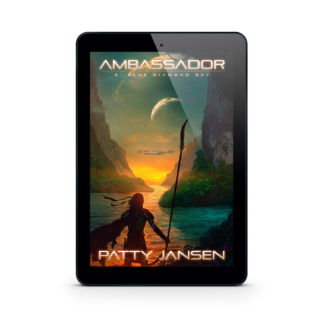