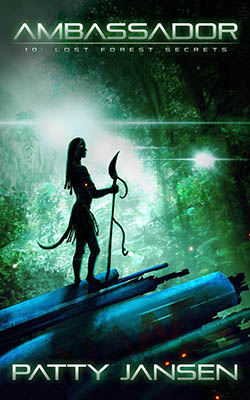 Ambassador 10: Lost Forest Secrets is book 10 in the Ambassador series

Ceren, the world that’s the home of the city of Barresh, has vast swathes of untamed wilderness, most of it tribal land belonging to meta-human tribes like the Pengali.

For many years, illegal organisations have seen these tribes as inroad into the lucrative gamra economy, abusing the local population with next to no payment, inflicting damage on their society. Sadly, Cory knows far too much about this, having studied Earth’s history.

However, if he thinks Ynggi’s Thousand Islands tribe is secretive and hostile, he will soon be corrected in a big way. Another tribe, the Misty Forest tribe, has made hostile overtures to the fiercely independent but peaceful Thousand Island settlements. Someone has been selling these people hostile propaganda. Not just that, they appear to have received some help from off-world and are on a mission to expand their territory by force.

For Cory and his team, an anthropological excursion turns into a battle to leave the forest alive.

The light was on in the hall when I arrived home, a sign that most of my team were still up. I ducked into our room, but Thayu and Emi were already asleep, and so were Veyada and Mereeni and Ileyu. The curse of being a parent to a young child.

Eirani was obviously still at the party, but I met Deyu coming up the stairs carrying a mug of manazhu.

She saw me looking at it. “Would you like some?”

“No, she hasn’t. I was looking for her, but I couldn’t see her. One of the guests said she’d left. I assumed she was with you.”

I went down the corridor. The door to the guest room stood open. The light was off.

Well, damn. I turned around. Deyu had gone into her room. I could hear her talking to Reida.

I knocked on the door. “Where is Devlin?”

“He was in the kitchen,” Deyu said, after opening the door.

“Who is in the kitchen?” a voice said.

Devlin came walking through the hallway in the direction of the hub. He carried another steaming mug and a plate with a slice of Eirani’s nut bread. “Were you looking for me?”

“I was. Can you check where Raanu is?”

“Sure. Let me put this down.” He held up the plate and mug. I followed him into the hub, where he set down his things, sat on the bench and activated the control panel with a touch of his thumb.

Deyu and Reida came in after me, and, as usual, they leaned their elbows on the outer edge of the semicircular hub console so that they faced up and could see what Devlin was doing. The bluish light from the controls hit their faces from below.

Devlin skipped through a couple of menus and pulled up a list with codes, selected them all and dropped them into another menu, which plotted them as dots over a map of the Barresh delta.

As I asked the question, another dot appeared, this one at the edge of the next island.

That was the island of Barresh where the poorest people lived, mostly the Pengali who worked in the shops and who cleaned the streets.

No one knew the answer to that.

And then I realised something else. “There are no trains from the gamra island to the city at night.” I remembered the boat that came to the beach and the extra person climbing in.