what writers shouldn’t blog about?

A lot of the points make perfect sense. I mean – if you expect to have any kind of business relationship with people in the industry, dissing them in public is not going to earn you any brownie points, and is not going to make them likely to work with you ever again.

Then again, this assumes that your agent/publisher is reputable, and this is something you don’t always know, or can’t always trace at the time of signing a contract. Not every writer has the luxury of being able to work with a big established publisher. If the relationship is already broken, and if you are convinced that there is a situation that may well hurt other writers, if you have an experience that’s nothing short of a scam, please do blog about it.

Similar to her advice to never blog about how much you earn. A couple of US writers have blogged extensively about how much they earn. Or should I say how little. Far too many people who are not writers think selling books is going to make you millions. After all that’s what R.J. Rowling gets. So the general public may feel inclined to share pirated copies of ebooks (because writers get enough money anyway, don’t they?) and feel unsympathetic to the writers’ cause in cases like the big disputes with Amazon we saw recently. With all writers staying nicely angelic and evasive about their lack of income, how is the public ever going to know most of us don’t earn enough to make a living?

Health issues? Well, for some writers, their health, or lack of it, is what they are. Personally, I find Jay Lake‘s descriptions of how he deals with invasive cancer much more moving and more engaging than chatty promo messages from authors about where they will next be to sign their books. Not only that, it makes me more inclined to buy Jay’s books (which I can’t buy off the shelf in Australia). The personal element does so much, even if Jay’s descriptions of his GI issues become a bit graphic. They’re always incredibly moving, and desperate, and I find a lot of emotion in those posts. My dad died of cancer a number of years back, and I can relate to those posts.

What I totally agree with is that writers (or anyone) shouldn’t blog about other people (mentioning their names) without permission, especially their children. You’re a public personality. You want to be careful posting pictures of your pretty teenage daughters.

I also agree that saying anything about other authors is fraught with danger. This is one of the reasons I don’t want to do book reviews. I know the authors of a lot of published books in Australia. I feel that, being behind the scenes of the SFF community, I’d be breaching a trust if I started giving book reviews and airing a book’s weaknesses in public at a time the author is powerless.

In all, I think writers may well blog about anything they feel like, as long as they understand the implications of what they write. And that just happens to be the essence of writing. 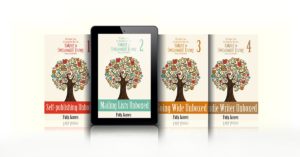