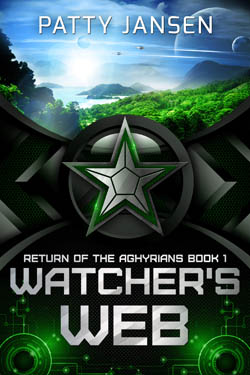 She is lost on an alien planet. He said he’d help her get home. He lied.

No one is going to come to rescue her. In fact, they’re not even on Earth.

Jessica has always been able to use her mind to tell animals what to do and now she’s hearing voices in her head. Another man is pleading her not to listen to Brian. Except this man can kill someone with a single look, and he uses his mental powers to order people around.

“The rich and powerful tapestry of world building captures the imagination and just doesn’t let go. The characters are full of life and complexity. I thoroughly enjoyed this story. It is easy to identify with the peoples and through suspension of disbelief, this world was very real, as are the struggles being faced. Love books that make me think about what I would or wouldn’t do in that situation. Great strong female lead.”

“Hollywood, are you listening? This story should be made into a movie! Avatar, move over. There’s a new kid on the block! This story is well written and the characters have plenty of depth. The story flows from one page to the next, from one chapter to the next. It keeps you on the edge of your seat from page one til the end.”

She sat in the creek, taking deep, calming breaths.

Water again seeped up the legs of her jeans—they had only just dried from falling in the same creek last night.

Come on, Jess, you can handle this. You’re not some ninny from the city.

What was the best plan? Wait here to be rescued, until the poachers or whatever they were came back? Face them—by herself?

She’d better find a road or something leading to civilisation. It couldn’t be that far away.

Which direction should she go?

Instinct told her to follow the creek—at least she’d have water, but the poachers would probably think the same. Then where?

Her gaze went up the creek bank, up the hill on the other side. Maybe she could see something from up there.

Move your bony arse, Jess. Let’s get out of this shit.

That’s what she did if something troubled her: work hard, go riding, clean out her mother’s chook pen, fix the fence, or shoot some rabbits.

She ran to the plane, and threw all the luggage out the door. The businessman’s laptop computer landed in the leaf litter, followed by Brian’s weekend bag, which contained only a pair of riding boots, a shirt and a bag with a horse’s reins. The pilot’s bag contained running shoes and damp and dirty clothes. Did no one bring anything useful? Ah, a tool box. That was at least something. And a rope. Now to pack it.

She turned her backpack upside-down. An avalanche of school things fell out. Homework, reading assignments, diary and library books.

Now, what was in this odd assortment of personal belongings that she could use? The rope, her spare shirt and pairs of underwear. A small saw, a hammer and a box of nails, a roll of string.

She added the water bottle, a plastic bag and the pilot’s empty thermos.

No food—she had no food.

On the other hand, wherever she had landed, she wouldn’t be more than half a day away from some sort of civilisation. People would be looking for the plane. If she could get clear of this ridiculous forest, they would find her. Uncomfortable words were there in the back of her mind.

This isn’t the Australian bush.

She heaved her backpack onto her shoulders. In her mind, she could hear her father’s voice. If you have a breakdown in the middle of nowhere, don’t leave the vehicle. A memory: an abandoned and bogged four-wheel-drive. There had been something on the news about German tourists who got lost in the desert in Western Australia. Blanket-covered bodies in the red dust.

Stupid people, her father had said. Never do that, Jess. Stay with the vehicle.

“Sorry, Dad,” she whispered and her voice sounded unnaturally loud.

She turned away from the wreck and trudged down the slope.

At the stream, she stopped to fill the water bottle. The water was crystal clear and probably fine to drink. The city girls at school always wanted to muck around with water purification tablets, but if they were camping in the mountains, she never used any.

As she straightened to screw the cap back on, someone touched her shoulder from behind.