Blood & Tears is book 3 in the Icefire Trilogy series 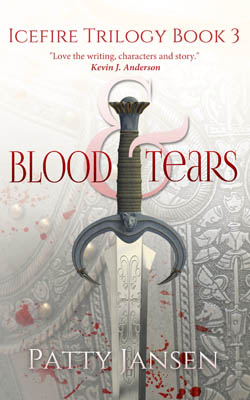 Following the destruction of the City of Glass through an explosion of sonorics, huge numbers of refugees have descended upon the Chevakian capital Tiverius.

The refugees are mostly members of the rebel group Brotherhood of the Light, supporters of the old royal family. They are injured, scared and hungry, and few speak Chevakian. The young Queen Jevaithi and her lover Isandor are amongst them, safe from the Eagle Knights for now.

Young Eagle Knight Carro is waiting in an old farmhouse with his fellow Knights for the order to invade the camp, capture the Queen and deliver her back to his father, where she will continue to live as imprisoned puppet for the Knights’ tyranny.

The Chevakians know none of this, and struggle to contain the refugee population, and the dangerous sonorics contamination the people have brought from their ravaged country, contamination that defies Chevakian efforts to contain it, and is getting worse, not better.

In their struggle for power, the Brotherhood and the Knights disturbed something from an ancient and magic civilisation.

The sorcerer Tandor knows what happened, but he is on death row in a Chevakian jail.

The southern woman Loriane is aware of the things that are required, but she is amongst Chevakians who can’t understand her.

The Chevakian proctor Sadorius han Chevonian could put the pieces of the puzzle together, but he is struggling to keep the peace, and besides, Chevakians don’t believe in magic.

Meanwhile, the massive, and malevolent, sonorics cloud drifts towards the city, hungry for revenge.

“This trilogy was great. It kept my interest from the beginning of book one throughout book two, and three. Would definitely recommend this series.–Amazon reviewer”

“Fantastic read! Loved the characters and the suspense. I wish there was more as I didn’t want it too end.–Kobo reviewer”

Buy Blood & Tears direct from the author with delivery by Bookfunnel

It was well past midnight when the truck stopped at the gate of Sady’s house. Orsan got out of the seat next to the driver, walked around the side and opened the door. Sady climbed out, into the cloud of steam that blew from the escape valve, pulling the sides of his cloak together against the biting wind.

‘Thank you,’ he said to the driver.

‘My pleasure, Proctor. Get some rest. I’ll be back here tomorrow morning, as usual.’

The street was darker and even more quiet than usual. Low scudding clouds stopped any starlight reaching the ground, and ever since the bell had rung, the people of the city remained indoors. For the first time in Sady’s memory, the famous street lights of Tiverius remained unlit.

Sady shivered with the damp aching cold and fatigue. His eyes were gritty with lack of sleep. After the skirmishes in the refugee camp, he had gone back to his office to deal with the polite unhappiness of the senators, and with the much more rude complaints of the citizens, who told him bluntly that they did not want this southern menace in their city. Mercy, could these people just explain to him what they would have done? Turn the trains around and send the poor wretches back to their ravaged country?

Sady strode towards the gate where Orsan exchanged a few words with the young guard at the gatehouse, across the path flanked by meticulously clipped bushes, up the steps to the front door, which Orsan held open for him.

The hall was lit only by the lamp that Lana lit after dark and that normally burned all night. By its flapping light, Sady turned to Orsan.

‘Any word from my house guests?’

Orsan shook his head and fixed him with an intense stare. ‘Sady, it can wait until morning. Get Lana to make some soup and go to bed.’

Sady couldn’t argue with that. Soup sounded great. Bed even better, although he suspected that once he lay down, sleep would be the last thing that came to him.

He took his cloak off in the hall, and with it, the stoic façade of strength. He let his shoulder sag and dragged his hands across his stubbled face. Mercy, he didn’t think he’d ever been so tired in his life.

But even here, in the comfort of the hall, he still saw the filthy people on the platform, the stack of bodies. The living with weeping sonorics wounds. He smelled the incredible stench. He saw the angry faces of the refugees in the camp. In the despair of having lost all they had, they only asked to have their dead relatives’ bodies returned to them. They’d been robbed of all dignity, and clung onto what little they had. Their customs, which they couldn’t practice in this climate.
He still heard the sound of the ringing bell. Saw the panicked faced of younger Tiverians, who had never heard it ring before.

It was dark in the hall and he heard no sounds.

There was no light at the end of the corridor that led to the guest wing. The surgeons must have already gone home. He was relieved about that; Sady had no desire to become more intimately acquainted with women’s business than absolutely necessary.
He could still see the woman’s bruised and red-blotched abdomen. The thought made him shiver. The child was too large to be born normally, the physic said.

He hoped she survived. He hoped the child survived. He knew that the surgeons were getting better at this every day and that both women and their children often survived. That would be one point of light in this misery. Mercy, he’d never thought that this was the way his house would ever see a baby.

He walked into the kitchen where a single light burned against the back wall. The benches were empty and clean. A bowl of fruit stood in the middle of the table.

‘Hello? Lana?’ Expecting to hear a voice from the pantry, _I’m in here! Wait a moment. Do you want roccas or some soup?_
Now that he came to think of it, he was more than hungry. It could be the reason why he felt so ill. He couldn’t even remember his last meal.

The pantry door was closed. The back door into the laundry was closed. The corridor to the servant quarter was dark.
That was strange. Lana was always here. He couldn’t imagine that she had gone to bed; she never did before he was home. But then again, it was very late.

He left the kitchen and knocked on the door to her private room. ‘Lana, I’m back.’ She would want to know; she would worry if he stayed out too long.

There was no reply.

Neither was there a sign of life from anywhere else. Him making this much noise should have brought out Serran, because he was responsible for the grounds, or Farius, because as guard, he slept lightly and would soon have to take over from the young guard at the gate. Or Merni, because she was a gossip, and would make sure that she didn’t miss anything.

Sady walked into the dark living room, feeling stupid. Here he was, the great leader of the country, and he was unnerved by being alone. Unnerved by feeling so strange in his own house.

The living room window looked out onto the courtyard, where he could only see a stone bench lit by a lantern on the patio, a little island of light in the dark.

The windows in the guest wing to the right hand side of the courtyard were dark.

He was curious to know about the baby, but he’d better not wake the guests. The woman would be tired and probably still sedated from the procedure. Her family would have been exhausted. They’d spent days in a filthy train. No doubt Lana and the others had shown them where to bathe and had given them clean clothes.

He went back to the kitchen and scouted for some food, cringing at every noise he made. The clank of a plate on the stone bench, the rustling of wrappers, the hiss of the flame under the kettle, it all sounded so incredibly loud. He found some bread and a bit of goat’s cheese, which crumbled all over the bench when he cut it up into clumsy, too-thick slices.

He sat down and ate, listening to the silence of the house.

And the other sounds invaded his thoughts. The yelling of the men in the camp. He didn’t understand their language, but he could feel the sort of thing they said. Can I please send my wife into the next world with dignity? In times of hardship, those seemingly unimportant things etched into your memory and wouldn’t let go. The younger generation didn’t understand that. Not that he would blame them, but they’d been fortunate enough to never see hundreds of people crammed into a cellar for days without food. They didn’t know about the stink of too many bodies in a confined space, and what happened when a boy projectile-vomited onto those around him.

Sady could still smell it. He could still see the mother’s embarrassment, her despair. Her son was seriously ill with sonorics, and yet her immediate concern was the irritation of the people around her.

Sady could still hear her, and the boy’s muffled cries. And the ringing of the bell. He would probably never forget that.
Somewhere in his mind, he registered that the water was boiling and probably had been doing so for a while. Now, where did Lana put the teapot?

As he pushed up from the seat, there was an enormous crash at the back of the house, and the breaking of glass.
He froze, heart thudding, halfway to the kettle. What in all of mercy’s name was that?

‘Lana?’ he called at the door. Surely, that crash would have woken the whole house up.

But again, there was no reply.