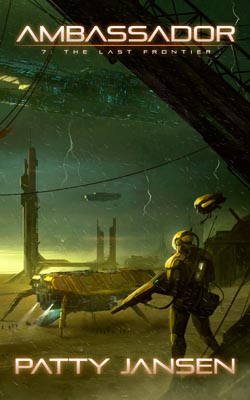 Ambassador 7: The Last Frontier is book 7 in the Ambassador series

Praise for Ambassador 7: The Last Frontier

“I absolutely loved this book! Please get the next one out ASAP! –ARC reader”

Veyada steered the dinghy to the middle of the beach, where, heavily laden as we were, we could still come quite close to the shore without anyone having to get out and wade through waist-deep cold water.

Quite a number of people remained on the beach, including my father’s neighbours. When we arrived, they all wanted to know what was going on, and whose the other boat was.

I felt guilty about having brought this world of violence and distrust into their community. These were good, trusting people. I tried to explain as best as I could without alarming them. But a couple of men were dead and that alone was alarming. They had seen it. Children had seen dead bodies in a dinghy.

The fact that these dead men weren’t “real” people alarmed them even more. Even the people of Rocky Bay had heard of the faceless assassins who had murdered heads of state in faraway countries. Why had they come to their safe and secluded part of the world?

I didn’t know what to tell them. Because I was here? But that seemed like I had a high opinion of myself.

I’d met most of these people for the first time in the past two weeks, and they had accepted me. The least I could do was answer their questions as well as I could.

We were standing on the beach, surrounded by the locals when there was a strange moment of silence. The air vibrated.

Something out in the bay went thump and again, thump. I could feel it though the soles of my shoes.

People on the beach gasped.

As if slow motion, the sides of the rented yacht blew outwards and out of the water. A spout of water gushed up, rising from the bay like a fountain. It sprayed outwards, over the nearby police dinghy and the officers in it. The dinghy rose and tipped sideways. A few of the occupants fell out.

My father’s boat copped a big splash, too. It rocked violently from side to side, the mast swinging.

Then the remains of the rented yacht, and the dinghy still containing the bodies, sank below the surface, leaving a big wave in their wake.

Sheydu gaped. I knew that she had searched the rented yacht for explosives and found none.

These people had smarter equipment than we had.

There were people in the water, yelling. I recognised Jarek Malicki with his life vest, hanging onto the side of the rubber dinghy.

The police officers had also fallen out, and one climbed back in, but the dinghy was full of water.

The people on the beach sprang into action.

“We got to go and help them,” someone said, and a few people ran to drag another dinghy into the water.

As we stood there, as the locals fired up the engine, as the police were bailing water out of their inflatable, as my father’s boat still rocked with the wave from the explosions, my reader burst into life with a cacophony of all the possible alarms that could go off.

I shut the noise down, but then it beeped, and then again and again. And then it let out a constant stream of beeps.

I pulled it out of my pocket, expecting to see something about the explosion, a message of glee or a threat, but it was a screen full of notifications about meetings and agenda items to be added . . . and more scrolled over the screen as they came in.

I’d stopped working for Nations of Earth years ago. I used to get this stuff—until I figured out how to turn it off—but I hadn’t received any of it since at least two years before I went to Barresh.

And still the stuff was flowing over my screen. Thousands and thousands of messages.

Sheydu stood with her hand over her ear on the side where she wore her feeder which she had connected up to her devices. Nicha had pulled out his reader as well.

The messages on my screen flowed and flowed .

In between the automated notifications that I shouldn’t be getting, I spotted some other subjects.

Cory, are you there? from my officer at the Exchange who was in Brazil at the moment.

A bit later, Cory, did you get my message?

Mr Wilson, do you have some time? From someone at a commercial office.

Another person asked, Given the current situation, could we get some advice?

And yet another, Biotechnical industry seeks off-world contacts.

I always got lots of messages, questions and meet requests from those people when I was here. Many wanted to do business with gamra. Few went ahead with it, but the interest was always there, until they realised the extent of the bureaucratic hoops that needed to be jumped.

As soon as I visited Earth, those types of requests exploded.

I had thought that it was odd that I hadn’t received anything for so long. But I’d assumed that for once, my liaison office at the Exchange respected the fact that I was here on a holiday, and that they would contact me when something was up.

Not only hadn’t they contacted me, it seemed that, judging by the headlines, there had been some sort of chaos.

And I even found a message from the Exchange saying, Urgent discussion needed.

The message was a few days old, and it mentioned that Amarru wanted to speak with me, if a secure line was available.

Thayu and I looked at each other.

Sheydu said, “That boat that just blew up? It was maintaining a communication filter. It let through just enough that we weren’t getting suspicious, but it kept out the majority of news.”