She is lost on an alien planet. He said he'd help her get home. He lied.

No one is going to come to rescue her. In fact, they're not even on Earth.

Jessica has always been able to use her mind to tell animals what to do and now she's hearing voices in her head. Another man is pleading her not to listen to Brian. Except this man can kill someone with a single look, and he uses his mental powers to order people around.

Watcher’s Web is the first volume in the Return of the Aghyrians series, a series of four interconnected standalone novels.

This volume tells the story of Jessica, a young student, lost on an alien world. She has to work out where she is, how to get out, who to trust and ultimately, who she is.

It’s also a story of the two men who try to influence her. Brian is on the flight with her when it crashes into thick rainforest. It’s clear he knows more and that “Brian” doesn’t half describe who he is.

The mysterious dark-eyed man talks to her in her mind. Jessica has no idea who he is either, or whether he is real.

Add in a tribe of vicious aliens and the potential for making irreversible mistakes is huge.

Learn about Ikay, the tribe’s elder, and her group of tailed humanoids who provide a vital service to the nearby city.

Learn about a ruling class that represses its citizens, and a brewing conflict that sweeps Jessica up.

Read about betrayal, and love. 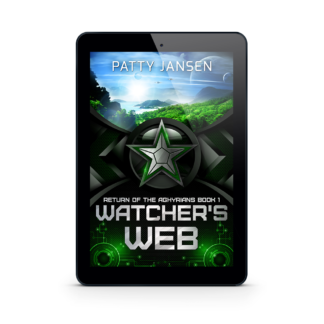 You're viewing: Watcher’s Web (Return of the Aghyrians Book 1) $4.99
Add to cart