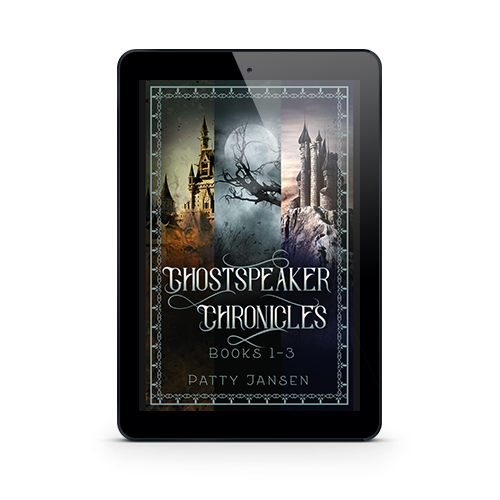 Ghosts, demons, wizards and a kingdom in trouble.

This collection of the first three books in the series has all the ghosts, demons and evil magic you ever wanted, and a strong heroine to deal with them all.

An unfamiliar coat hung on the stand. A man’s coat. Black. A very finely-made one with a very small pin on the coat’s collar: the rooster, the symbol of the Carmine House.

What in all of heaven’s name would Father have to say to the royal family?

In the stairwell, on the landing halfway between the ground floor and the second floor, was a little door that led into a low-ceilinged storeroom that had been built between the floors. The servants used this to store items of furniture that they didn’t use anymore, or spare plates or tableware that didn’t fit in the cupboards. This room was directly above Father’s office. Johanna paused at the stairs, looking carefully if anyone could see her. Then she opened the door quietly, went in and shut it again so that it became dark and stuffy inside. In the little cupboard-like space, she wriggled off her shoes and carried them in her hand while she very slowly climbed up the couple of steps to the room. The steps were odd, at an angle, and uneven. They were made of rough wood that creaked badly unless you were very careful and very slow.

The storeroom was barely tall enough for her to stand in. Father would have to bend his head to avoid hitting it on the ceiling beams. There was a window in the far wall. Half of it vanished below the floor and the bottom part of it was the window in Father’s study below. The light that shone through silvered items of furniture covered with sheets and various boxes and crates. One of them had Estlander writing on it. It had belonged to Johanna’s mother, Lady Sara Aroden, a minor duchess of the Estlander court.

The sound of father’s voice drifted up through the floorboards. Johanna sank to her knees, trying to make not the slightest of sounds, and put her ear to the floor. It was very dusty.

Father was speaking. “. . . We can provide loans, certainly. But I don’t know that we have the capacity to do what you ask.” 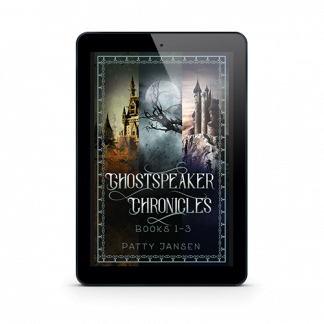