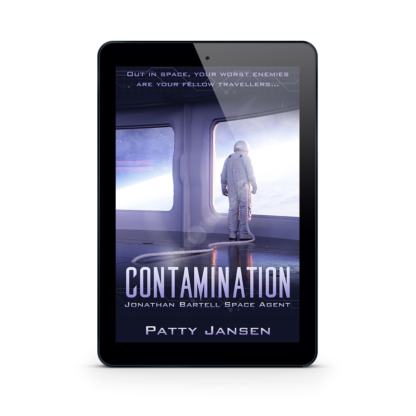 Jonathan Bartell is a young man, just out of university, when he signs up for the position of Quarantine Officer at the Orbital Launch Station.

He is part of a crop of students who flocked to study exo-biology when bacteria were discovered on Mars, and who are now all making their living flipping burgers, because the jobs are few and hard to get.

He is lucky to get a job in space, no matter how mundane.

Or so he thinks…

Gaby Larsen is a doctor at the tiny hospital at the space station, and she keeps secrets, not because she wants to keep them, but because she is too scared to share them.

Because out in space, your worst enemies are your fellow travellers.

JONATHAN INSPECTED the buttons of his brand new uniform—check—the Velcro straps on his shoes—check—his shirt being tucked in—check—and his name badge on the pocket of his shirt—check. He knocked on the door with the sign that said, “D. White” and underneath that, “Orbital Launch Station Quarantine Officer”.

Somewhere inside the room, a female voice said, “Come in.”

Jonathan pressed his hand against the metal panel on the door. The tiny light next to the panel flashed green and the door rumbled aside. He stepped into the tiny office and felt like he was pushed sideways. He almost tripped and most unceremoniously landed into the chair opposite Danna White’s desk.

She looked at him over the rim of her reading glasses. Her hair was cropped short, with the pepper-and-salt curls cropped close to her head.

“I didn’t say you could sit down.” Her severe face was lit from below by her computer screen. Her expression held not a shred of humour.

“Um. Sorry.” He scrambled up, trying to keep his balance, but a little voice in his head kept telling him that he was on an invisible bus rumbling down an invisible street and that, at any time, this bus might swerve, or stop.

That said, he’d been feeling a lot better than on the shuttle—that had been plainly awful—but still, artificial gravity didn’t have a blip on the real thing, and trying to walk inside a bike tube that was spinning at 3.5 rotations a minute was an acquired skill.

A skill that all those people in the Orbital Launch Station’s corridors had acquired, but he had, evidently, not.

And that made him the butt of jokes.

He clutched his pad harder, determined not to stumble or—worse—run off in search of a place to barf. That would never do, facing a woman who was his new boss and old enough to be his mother.

Jonathan sat down again in the same chair, looking at her wrinkled hands. In space, fluids tended to accumulate in the body’s extremities and she should look less old than on Earth.

On second thoughts, maybe she was old enough to be his grandmother. 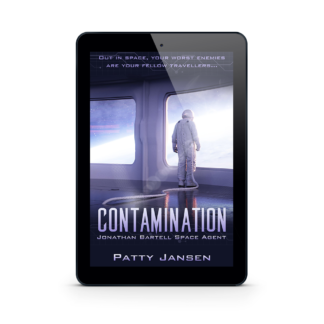 You're viewing: Contamination Space Agent Jonathan Bartell 1 $4.39
Rated 5.00 out of 5
Add to cart
One-time offer
Get all the books in the series for 30% off

Let’s do it!
Books will be added to your cart and discount applied automatically