Deadly creatures, hostile climate, and that is just the scenery.
For many years, mysterious things have happened on the ice world of Tamer, but when a scientist goes missing from Barresh thought to be on Tamer, Cory is forced to take the issue by the horns.
Problem is, he is dealing with unexpected side effects of his fertility treatment, and, like his Coldi companions, he’s lost much of his night vision, and has trouble tolerating low temperatures.
Trouble is, a recent addition to his team has sent shockwaves through his group of loyal companions and things are still sorting themselves out.

Not his healthy self, under-resourced, frozen and half-blind, that’s not the best preparation to visit a world where humans are not at the top of the food chain, let alone dealing with enemies who will go to any lengths to hide their activities.

Ambassador 8: The Alabaster Army print version is the eighth book in the Ambassador science fiction thriller series by Patty Jansen.

After years of knowing that the reckoning would come, Cory and his team finally have to deal with whatever is happening at the ice world of Tamer.

For years, artificial humans have been appearing in multiple gamra worlds. The Tamerians are strong fighters, but are mysterious because they have poor communication skills. It makes sense to send a linguist to figure out how they communicate, doesn’t it?

Except the linguist goes missing and his wife doesn’t take no for an answer. Even if she’s been told not to go to the authorities, she does.

Finding the linguist is the perfect excuse Cory and his team need to travel to Tamer.

But it’s not a friendly world. Apart from the biting cold, the fauna is savage and hungry, and people from gamra are not the only ones watching the world.

Add to that a strong magnetic field causing technical issue, an army of uncommunicative hungry soldiers and a stubborn old man, and the tally of dangers is complete.

Get your copy of the Ambassador 8: The Alabaster Army print book today!

Links to all retailers 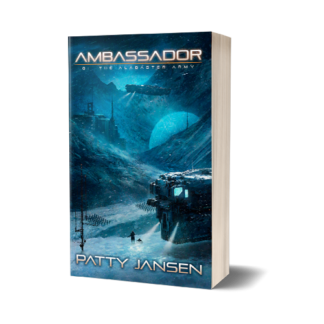