Ambassador 6: The Enemy Within Print

Two men went on a surfing trip in a remote area. Only one came back, accused of murdering the other.

Not quite, because the alleged murder happened on another planet, the accused is a member of the secretive Pretoria Cartel of super-rich business tycoons–with illegal off-Earth ventures–and the only person who can remotely be called a witness is an alien, the elder Abri from the Pengali Thousand Islands tribe.

Diplomat Cory Wilson is asked to accompany Abri to the Nations of Earth court, but when he and his team arrive there, their contacts have been moved to different cases, their rooms are bugged and their movements restricted. No one is answering their questions, but it is when a lawyer is murdered and Cory’s team captures a mysterious stalker that things get interesting.

Just as well they are prepared in the usual way: alert and highly armed.

Ambassador 6: The Enemy Within print version is the sixth book in the Ambassador series by Patty Jansen.

Taking a large party on a trip is an exercise in organisation. But taking a party of people from various worlds to attend a stiff, protocol-laden court case on Earth, is… another thing altogether.

Yet this is what Cory has to do.

The Pengali elder Abri has been called as a witness in the trial dealing with the murder of Gusamo Sahardyo by Robert Davidson.

Abri speaks only Pengali and Coldi. She adheres to strict Pengali custom which dictates that all disputes be resolved through betanka, a form of poetry accompanied by drums. It requires three generations to be present.

So Cory is faced with having to take a Pengali family, a set of enormous drums, and his entire team to Earth. And oh, did anyone mention the certified translator? Never mind that few people speak Pengali, let alone be certified at a level that bureaucracy approves of. And the two extra lawyers who bicker with members of Cory’s team. And the fact that a friendly lawyer gets swapped out for a clueless one, and that the original lawyer disappears, and…

The whole process is rigged. Cory knows that. There are deep political forces at work. The question is, when are the true players going to show themselves?

Get the Ambassador 6: The Enemy Within print book today. 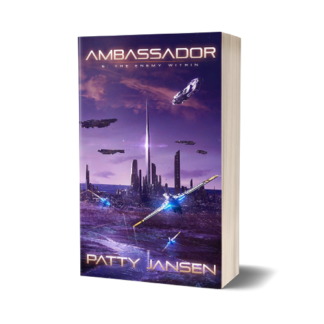