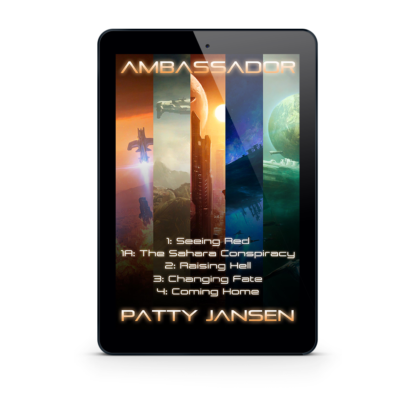 The 5-book set of the Ambassador series. In EPUB or MOBI format, delivered by Bookfunnel.

1: Seeing Red – Cory Wilson is about to start his new job as representative to gamra, the alien network that controls the network for wormhole travel, when a political murder may well end his position before it started.
1A: The Sahara Conspiracy – Cory is asked to deal with the alien mafia on Earth, and stumbles across a dangerous plot.
2: Raising Hell – the wormhole network goes down, and Cory's friend and leader of the largest populated world Asto is caught off-world. Dangerous politics are afoot on Asto, and Cory decides to help his friend.
3: Changing Fate – The outage of the wormhole network was caused by an artificial source: a giant ship that was last seen in the inhabited worlds over 50,000 years ago. Is it live? If so, who is on board? Cory and his team investigate.
4: Coming Home – By isolating the captain from his ancient ship, Cory hopes to avert hostile action. The captain has other ideas. 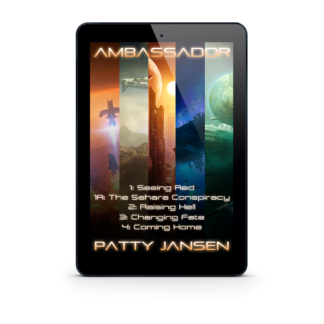