View cart “Ambassador 5-book set” has been added to your cart.

Ambassador 1: Seeing Red is the first book in the Ambassador science fiction thriller series. It describes the turbulent start of Cory Wilson’s career as Earth delegate to gamra, the organisation that looks after the interplanetary travel network. This is a dangerous world.

“It is the sign of a great story teller when an intricate political landscape can be seamlessly woven into your brain without you ever noticing. I was well and truly hooked. The hierarchies and customs of various alien races are understandably complex but not too much to lose the reader. The story is fast-paced and twisting as Cory tries to unravel who could perpetrate the attack on the President and why they would do so, while enduring stonewalling and spying from all sides of politics, including his own.” — Reviewer at SQ Magazine (sqmag.com/) 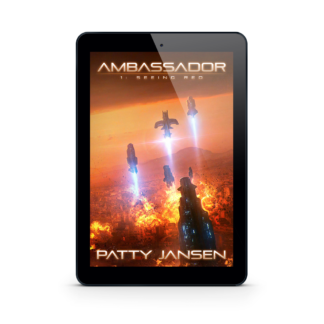